Break out the first-rate feline finery for the furriest celebration of independent film.  Now in its third year, the Catdance Film Festival* presented by Fresh Step® litter and hosted by actress and animal activist Nikki Reed, returns to famed Park City, Utah at the heart of the independent film scene on Jan. 24 to bestow the golden litter scoop to the best original feline short film and entertain guests with other MEOW-velous festivities.

Fresh Step is presenting Catdance as part of its Million Meow Mission, a campaign to help shelters and rescues find more forever homes for cats.  For the first time, feline film fans will mingle with adoptable kittens on the red carpet.  Six featured films starring shelter cats will debut at the festival along with a custom 14-karat gold and diamond cat dome ring worn by Reed. The feline bling will be auctioned off beginning Jan. 24 via FreshStep.com and 80 percent of the auction price will benefit the ASPCA® (The American Society for the Prevention of Cruelty to Animals®).

“I’m thrilled to host the Catdance Film Festival this year and support Fresh Step in its Million Meow Mission,” said Reed.  “I get to share the red carpet with adorable kittens, debut amazing feline films starring shelter cats, and wear a stunning cat ring to benefit the ASPCA, a cause very close to my heart – what’s not to love about this special night!”

Give a Round of Ap“paws” For Fantastic Feline Films

Catdance scratched the surface of kitty flicks in its first two years, and is back this year with six original cat short films, each starring shelter cats. The festival helps shine the spotlight on the fun and quirky nature of cats and supports Fresh Step in its Million Meow Mission. Help share 1 million cat moments using #MillionMeowMission.

“The 2015 Catdance Film Festival gives Fresh Step an opportunity to recognize and support both the talented filmmakers that put kitties on the silver screen and the adorable, adoptable felines that deserve the spotlight,” said Shekinah Eliassen, Fresh Step brand manager. “We hope the films will inspire cat lovers to support their local shelters and consider adopting a shelter cat.”

While many filmmakers pounced at the opportunity to enter, Reed will bestow the coveted 2015 golden litter scoop and $10,000 “kitty” to only one grand prize winner, who will see his or her film on the big screen that night. Also making its Catdance Film Festival debut is Fresh Step Lightweight Extreme litter, which will present a special film called “Hover Cat” showing how cats defy gravity. All kitty lovers can get their feline flick fix at FreshStep.com where the 2015 Catdance films after the event on Jan. 24.

Bring on the Beautiful Bling to Benefit the ASPCA

In addition to introducing the films, Reed will debut the latest in feline bling to benefit the ASPCA®.  Striking a pose on the catwalk, Reed will bear a paw-some ring designed by jewelry artist Ashley Berman of Ashley Morgan designs. The one-of-a kind cat-inspired dome ring is 14-karat gold with stunning sapphires and diamonds that make kitty’s face irresistible. Feline fashion lovers everywhere have the chance to get their paws on this custom ring, which will be on auction Jan. 24 through Feb. 10 via FreshStep.com. Eighty percent of the auction price will benefit the ASPCA®.

Fresh Step’s Million Meow Mission is designed to help shelters find cats loving homes. “For more than a decade, we’ve supported a multitude of cat care causes,” said Eliassen. “Through the Million Meow Mission, Fresh Step users can take simple steps that benefit cats in need one scoop at a time, one cat at a time.” 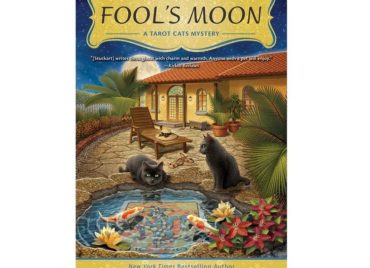 Cats in the News Fool’s Moon: A Tarot Cats Mystery