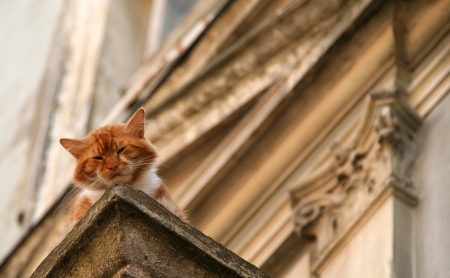 Always Landing On Their Feet

In 1984, a cat named Sabrina fell 32 stories from a New York highrise and landed on the concrete sidewalk below, a fall that would have killed a human. Not Sabrina. She suffered a chipped tooth, a mild lung injury and went home with a clean bill of health from the veterinary hospital two days later.  What is even more amazing about Sabrina’s tale? It’s pretty common for cats to survive falls from tall buildings, due to their innate reflexes.

Sabrina, along with all other cats, had a skill known as the cat righting reflex, developed when they were kittens to rotate themselves so that they land on their feet. (Fun fact: cats have no functional collarbone, which allows them to both flip and rotate themselves simultaneously.) Cats then will spread their bodies to reduce drag (kind of like a flying squirrel) and relax their legs to absorb impact. These superpowers are just the genetic inheritance of thousands of years of cats on the hunt.