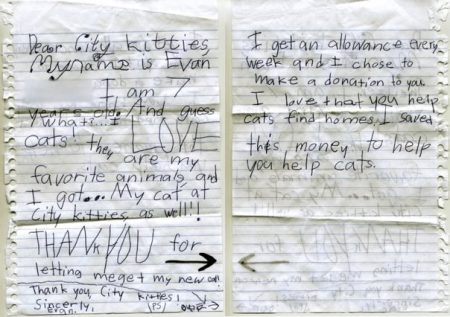 Evan helped his cat Macha find her forever home when he and his family adopted her from City Kitties rescue. It wasn’t enough for Evan though – he wanted to do more. Evan then decided to save up his allowance and donate it to City Kitties, enclosing the adorable note you see above.  Evan then sold figs at a roadside stand to raise even more money, and visited City Kitties every week to check up on his favourite foster cat, Calvin. Every week, City Kitties’ staff assured Evan that Calvin was happy in his foster home, but he was still waiting for his forever home. Evan found out, after five months, that Calvin had been adopted and shelter staff wanted him to stop by to say goodbye.

Evan was thrilled for Calvin, but was also really sad that he would be losing his friend. He asked if Calvin would be living near him, and if it might be possible to visit Calvin in his new home. Turns out Evan can see him all the time – because Calvin had been adopted by Evan’s family, and was coming home with them right away.