A pantheon of reigning felines

Our reverence of cats has deep roots. Tens of thousands of years before the ancient Egyptians held them in highest regard, felines figured prominently in world mythologies. In the pantheon of gods and deities, the majestic feline has reigned supreme for over 30,000 years.

Mythology is a civilization’s collection of stories addressing its worldview, beliefs and ideals, and cultural history, usually dealing with universal themes of creation, the life cycle (life, death and rebirth), and the explanation of naturally occurring phenomena. Myths may have been employed to explain a particular ritual, honour heroic actions, or impart wisdom; they could be serious or humourous, and, though ostensibly based on historical events, they did not have to be proven real to be important. There is considerable overlap in world mythologies because myths began as an oral tradition. Storytellers embellished the tales (as good storytellers do), people migrated, and as civilizations integrated and collapsed, individual myths fused or were lost. Perhaps thanks to its nine lives, the cat endured; traversing time and cultures, the feline has remained a constant figure in world mythology.

Archeological findings strongly suggest that early humans in the Upper Paleolithic Period, or Old Stone Age, a period extending from 35,000 to 8300 BC, were the progenitors of mythology, and lion-headed figurines played a prominent role in their spiritual beliefs. The oldest known animal-shaped sculpture is a lion-headed, human-bodied figurine known as Löwenmensch. Found in Hohlenstein Stadel cave in Germany, the statue was carved from mammoth ivory using a flint stone knife and dates to about 32,000 BC.

Though we may no longer recognize it, our 21st century culture is replete with the remainder of ancient myths. The English language uses many words borrowed from Greek feline-based myths, including “chimera,” “sphinx,” and “Leo.” A chimera is an illusion of the mind or an unobtainable dream, as well as a genetic term meaning one organ or tissue with diverse genetic composition, like a grafted plant. We call a mysterious or enigmatic person a sphinx or refer to them as having sphinx-like traits. And the fifth sign of the zodiac in astrology? Leo.

Whether lion, tiger, or tabby, in ancient Asian mythology, the cat’s primary role is that of guide and guardian of the human body and soul.

What do the three have in common? All are Greek mythological hybrid feline creatures; the Chimera, the Sphinx, and the Nemean Lion, or Leo, were pedigreed monster siblings from a fierce family that wreaked havoc on humans across the countryside with no Cat Daddy to call for help. Half snake and half woman, Echidna was their beastly mother. The sire of this part-feline brood was Typhon, a conglomeration of beasts boasting 1000 dragon heads with eyes that flashed fire, a human midsection covered in feathers and wings, and a lower body comprised of vipers that hissed, sounding like a lion’s roar. In the stories surrounding these fearsome adversaries, it was human wisdom and intelligence (sometimes with the help of the gods) that saved the day from the ravages of this duo’s progeny.

The fire-spitting Chimera had the body and head of a lion, a goat’s head on her back, and either a serpent’s or dragon’s hindquarters. Some accounts give her three lion heads and a goat’s body; in either version she was horrific. The Chimera terrorized Lycia (modern day Turkey), prompting the Lycian king, Iobates, to dispatch the human hero Bellerophon to slay the Chimera. To assist Bellerophon in his mission, the goddess Athena gifted him a charmed golden bridle and Pegasus, the winged horse. With Pegasus, he defeated the Chimera and exultantly returned home.

Following family tradition, the intelligent flying Sphinx, with the head and shoulders of a woman, body of a lion, and wings of a bird, also terrorized humans—but she elevated the game. Perched on a rock near the city of Thebes, she haunted travelers going through the pass to Thebes, posing a riddle and bargaining that if they correctly answered it, they could pass; if they failed, she devoured them. 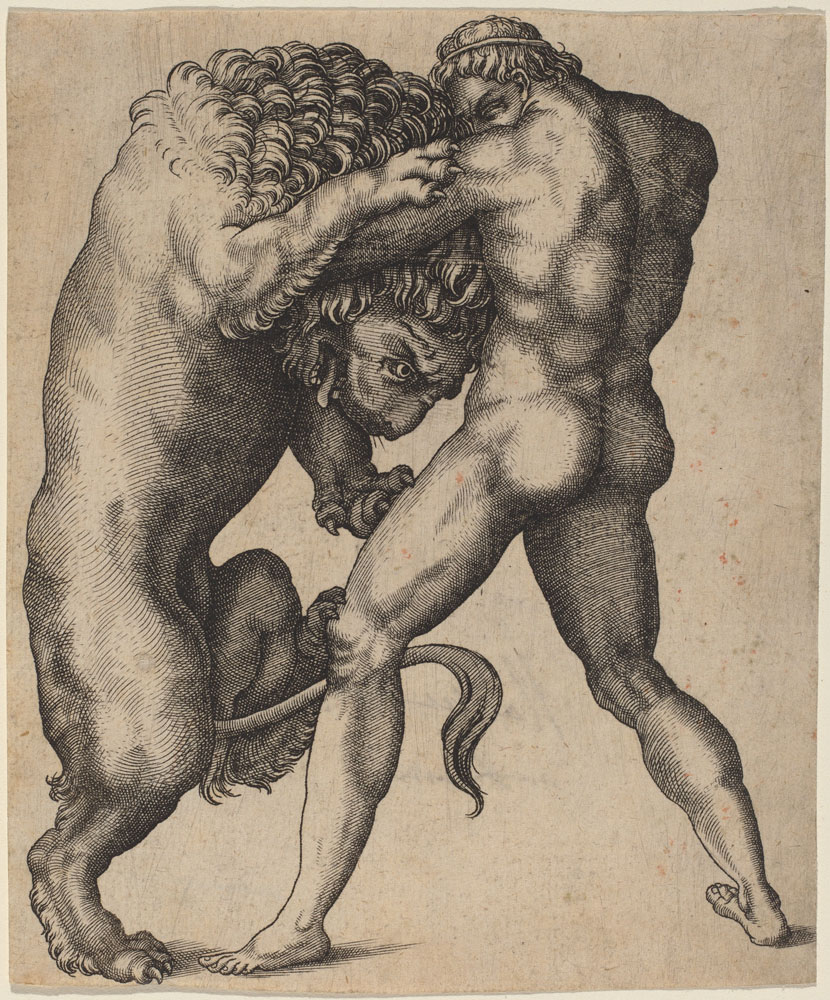 Convinced by an oracle that the Sphinx would kill herself if someone correctly answered her riddle, King Creon offered his crown and the hand of his sister, Jocasta, to whoever could answer the Sphinx’s riddle: “What animal goes on four legs in the morning, two at noon, and three in the evening?” As fate would have it, a young man named Oedipus solved the riddle. Oedipus had correctly realized it was an analogy of man’s life. A baby crawls in the morning on all fours, at noon an adult walks on two legs, and in the evening of life, an aged man walks with a cane—three legs. So distraught was she by a correct answer, Sphinx threw herself off her rocky perch to her death.

Compared to his siblings, the Nemean Lion was relatively easy to defeat. Hera, Zeus’ wife, nurtured and trained the deep-voiced, flesh-eating lion, and settled him in the hills of Nemea where he roamed as king, plaguing man. The Greek hero Heracles had returned to his home of Tiryns to purify himself after murdering his wife and children. In absolution, he offered to serve King Eurystheus in fulfilling any given task. Thus, Eurystheus sent Heracles on 12 thought to be impossible missions, the first to slay the Nemean Lion. Armed with charmed arrows from Apollo and a bronze club, Heracles set out for the lion’s double entrance cave. The Nemean Lion, with characteristics of his parents, was near invincible with sharp claws stronger than metal and impenetrable skin that rendered the club and arrows useless. Despite this armory, the determined Heracles blocked one entrance of the cave, trapping the lion. The battle was epic. With his bare arms, Heracles strangled the lion then skinned the beast with his own razor sharp claws. Heracles lost a finger, but returned victorious, wearing the lion’s skin, a cloak that would serve as his protective shield in his upcoming trials.

Though he had been defeated, the Nemean Lion’s strength had so impressed Zeus that he put the lion in the sky, forming the constellation Leo as a reminder that the Nemean Lion was the king of beasts. Heracles erected a tomb for his severed finger, marking it with a stone lion as a symbol of his power. Thus began the tradition of erecting stone lions not only at the tombs of people of stature, but also at the entrances to their palaces, temples, and other important places. 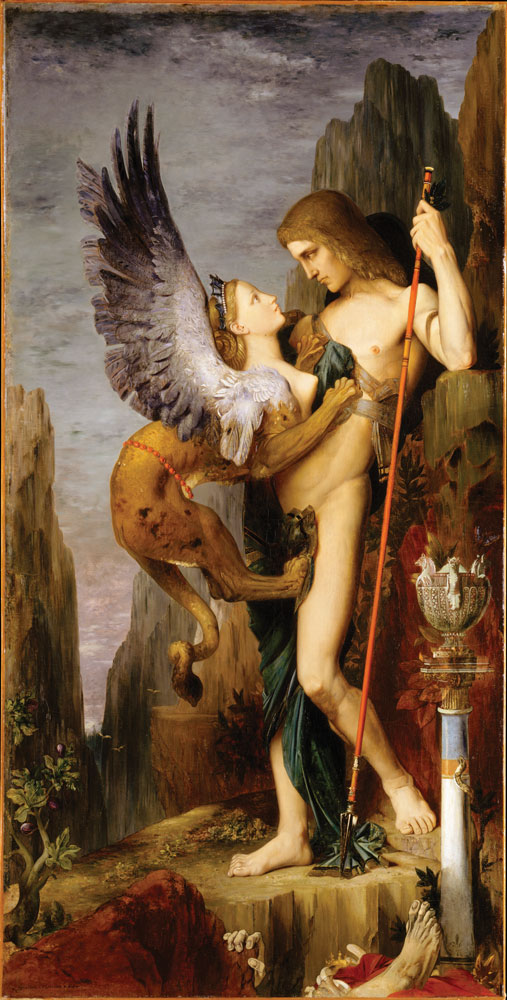 Moreau, a virtually unknown artist at the age of thirty-eight, triumphed at the Salon of 1864 with his interpretation of the myth of Oedipus and the Sphinx. This painting represents the moment when Oedipus confronts the winged monster outside Thebes and must solve her riddle to save his life as well as those of the besieged Thebans. Moreau’s choice of a mythological subject and his deliberately archaizing style distinguished his painting from the Realist and naturalist currents of the 1860s.

The practice of protective stone lions standing guard is a concept widely seen in many cultures. The noble Chinese guardian lions, Shishi, meaning “stone lion,” date back to the Han Dynasty (206 BC-AD 220). The Shishi are always in pairs. The male (yang) rests his right paw on a carved sphere and guards the physical structure; the female (yin) rests her left paw on a cub, symbolizing the cycle of life. The guardian lions are found in other Asian cultures with variations on the theme of life and death.

Whether lion, tiger, or tabby, in ancient Asian mythology, the cat’s primary role is that of guide and guardian of the human body and soul. Domestic cats have their place along side the big cats in mythology, too. Legends from Thailand (Siam), Burma, and other Asian countries, have cats as the vessel that transports a monk’s or royal person’s soul to heaven after death. The concept, known as “transmigration of soul” is also found in Egypt.

During the time period of AD 1350 to AD 1767, Siamese monks labouriously transcribed and illustrated a manuscript, Tamra Maew, or “Cat-Book Poems” or “Cat Treatises.” The work includes hundreds of pages chronicling their adoration of the temple cats. Originally from the royal Siamese city of Ayudha, today the manuscript resides in the National Library of Thailand in Bangkok.

Important feline-human deities reign supreme in Asian mythology and these colourful tales beautifully explain religious beliefs from Hinduism, Buddhism, and Taoism. The Hindu god Vishnu, “Preserver of the Universe,” descended to earth in the form of Narasimha, another lion-man figure, who restored order to earth when negative forces threatened it by ambushing the evil at dusk. Simhavaktra Dakini, the ferocious lion-faced guardian of Vajrayana Buddhism, is a female “sky-walker” who guides human beings along the right path and removes physical hindrances and spiritual obstacles such as pride and ego.

These are just some examples of the cat’s dominance in these endlessly fascinating and deeply complex world mythologies illustrating their society’s cultural and spiritual beliefs. Big cat or small, wild or domestic, the sovereign feline is intricately woven into the rich communal tapestry handed down from our most ancient ancestors