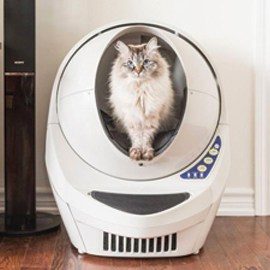 Cats in the News Play

“The number one thing we hear from people who buy a Litter-Robot is some variation of ‘It changed my life,’ shares Lori Bates, Litter-Robot’s Content Marketing Manager. “Customers have even gone so far as to say the product ‘saved my marriage.’

The online reviews are equally positive. Reviewer Sara O., who sent the Litter-Robot III Open Air to her sister as a housewarming gift, comments, “My sister sent a thank you but I could tell she thought it was a little strange, something like giving a toilet as a gift. Over the next week as her cats started using it, she texted me it was the best gift she ever received.”

Litter-Robot is the brainchild of Brad Baxter, Litter-Robot’s President and Inventor. His “ah-ha” moment was provided courtesy of his two cats who weren’t consistently going in the litter box. Brad graciously concedes it wasn’t their fault—he wasn’t keeping the litter boxes as clean as he should have been. It was while cleaning up after them that Brad started to think about ways to automate litter box scooping.

Brad hit upon a rotational concept, like a carousel, that would lift and sift the litter via gravity. But upon doing a patent search, he found a similar, but better concept overall. This is where many would hang up their hat, but Brad forged ahead. “Instead of getting discouraged,” he says, “I contacted the inventor and within a few months we had signed a license agreement and I proceeded to expand on the original patented design and prototypes.” 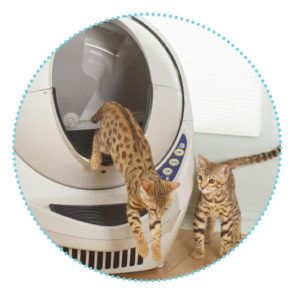 Although the basic concept was solid, there were design challenges around cat sensing and total clump removal that Brad solved. Getting it to market involved his parents taking out a second mortgage on their home in exchange for a share in the company. This being 1999, there was also a learning curve around then-new e-commerce and Brad’s direct-to-consumer business model. “Not knowing any better and not understanding the need for strong marketing, the process of ‘going to market’ was very slow and organic,” Brad concedes. “We were always under capitalized and we lost a lot of money during the first five years of the business,” he admits. But once they started to turn a profit and could invest more in marketing, the tide turned and they haven’t looked back.

“For me, the greatest thing about being an entrepreneur is the independence and control over one’s destiny and the ability or freedom to be creative every day in all aspects of the business,” Brad enthuses. “There were many tenuous periods but when a venture like this is ultimately successful, it’s extremely satisfying.”

Not one to rest on his laurels, Brad continues to innovate. The latest feature is the new Connect app, which allows for remote monitoring and control. Wherever you are, you can view the waste drawer level, get notified that it’s time to empty the drawer, and even monitor usage stats for insights into your cat’s health—a sudden increase in use, for example, could be an indication that your cat has a urinary tract infection and a visit to the vet is in order. Pretty nifty stuff! 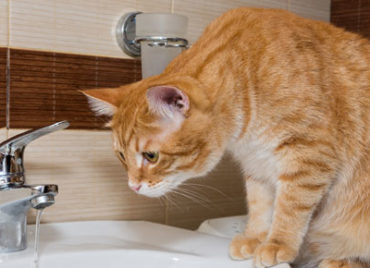 Cats in the News What Happens When A Cat Learns How To Tu... 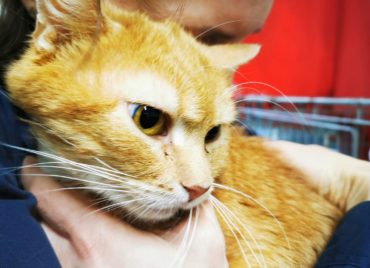