Injured Cat Inspires People All Over the World

Out of injury, inspiration to never surrender

When, last August, Maria Romano Trampé and her friend Beth Ashcom took in a stray cat with a very serious eye problem, they had no idea the phenomenal journey they were about to embark upon. They hustled the little cat with the gaping facial wound straight to the vet, where he was diagnosed with Squamous Cell Carcinoma, an aggressive cancer, and given just a few weeks to a month to live. Maria and Beth decided they would take Tyrone, as they named him, home and provide hospice care, so that when his time came he would leave this world with dignity and grace, having known he was loved.

Tyrone, however, had other ideas. Though it was extremely touch and go for the first months, by November Maria and Beth started noticing a difference in Ty—it seemed he would react to the movement of a hand near his injured eye area. But that was impossible, wasn’t it? Two doctors had confirmed his eye was gone.

Sure enough, he still had his eye—the wound had been so severe it was assumed Tyrone could not possibly have retained it—and furthermore, he could see out of it!

Tyrone's Motto:
“I think a hero is an ordinary individual who finds strength to persevere and endure in spite of overwhelming obstacles.”
—Christopher Reeve

At this point, Tyrone began a course of extremely potent antibiotic shots and ointment and began improving even more. The vet then biopsied the abnormal tissue and—the results were negative for cancer! Tyrone still has more healing to do, but with the stalwart love of Maria and Beth, Ty is back from death’s door. 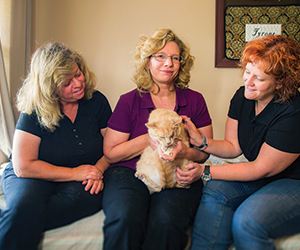 Certainly, this cat, one many would have given up on, has had extraordinary support. Maria and Beth started a Facebook page to bring awareness to special needs animals and Tyrone soon became a huge hit. They receive messages and letters regularly from people who say that Tyrone has inspired them not to give up. “Many who suffer from depression have stated that Tyrone’s posts are the bright spot in their day,” Maria shares. “We have also had many people battling serious health issues tell us that because of Tyrone’s tenacity and will, they feel they too have the strength to fight. Tyrone has thousands of fans that span the globe in 45 countries!”

Maria and Beth were not immune to Tyrone’s inspiration either. Along with friend Amy Hamilton, they have formed a 501C nonprofit, All Souls Connected, in honour of Tyrone. Their mission is to provide educational programs to local communities and schools to educate youth, curtail animal abuse, and emphasize that special needs animals deserve the same respect and opportunity to live full lives as any other animal. They also provide TNR and rescue assistance. Quite the legacy for a cat that almost didn’t make it!

Through it all Maria has remained adamant that Tyrone has given just as much to them as they’ve given to him. “Special needs animals can provide even more than a healthy animal,” she says. “They prove to their families on a daily basis that a disability is all in how you view it.”

Her answer to our question “What lesson have you learned from your cat?” is succinct:

If you would like to support their non-profit mission of education and caring for animals, earth, and sky, go to allsoulsconnected.org.
Big thanks to our super awesome Star Cat contest sponsor Cloud 9! 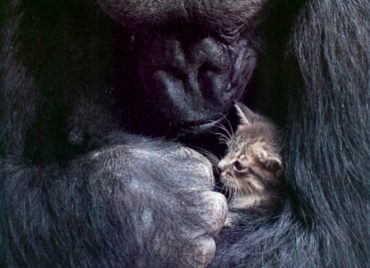 Daily Meow The Cat Did It 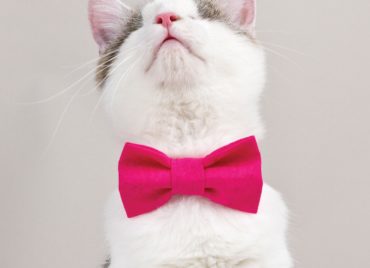