If you haven’t already, be prepared to fall for this famous cat provoking collective awww’s across the internet

This proudly hirsute cat—“I’m a girl and my mustache is better than yours,” as her Instagram account proclaims—has achieved the kind of fame usually reserved for Hollywood starlets. With the help of her human, Kady Lone, this Minneapolis-based cat known affectionately as Pudge has amassed over half a million followers on Instagram alone. We asked Kady some questions about the adorable Pudge and just what kind of effort goes into managing the social media accounts of her super-famous cat. 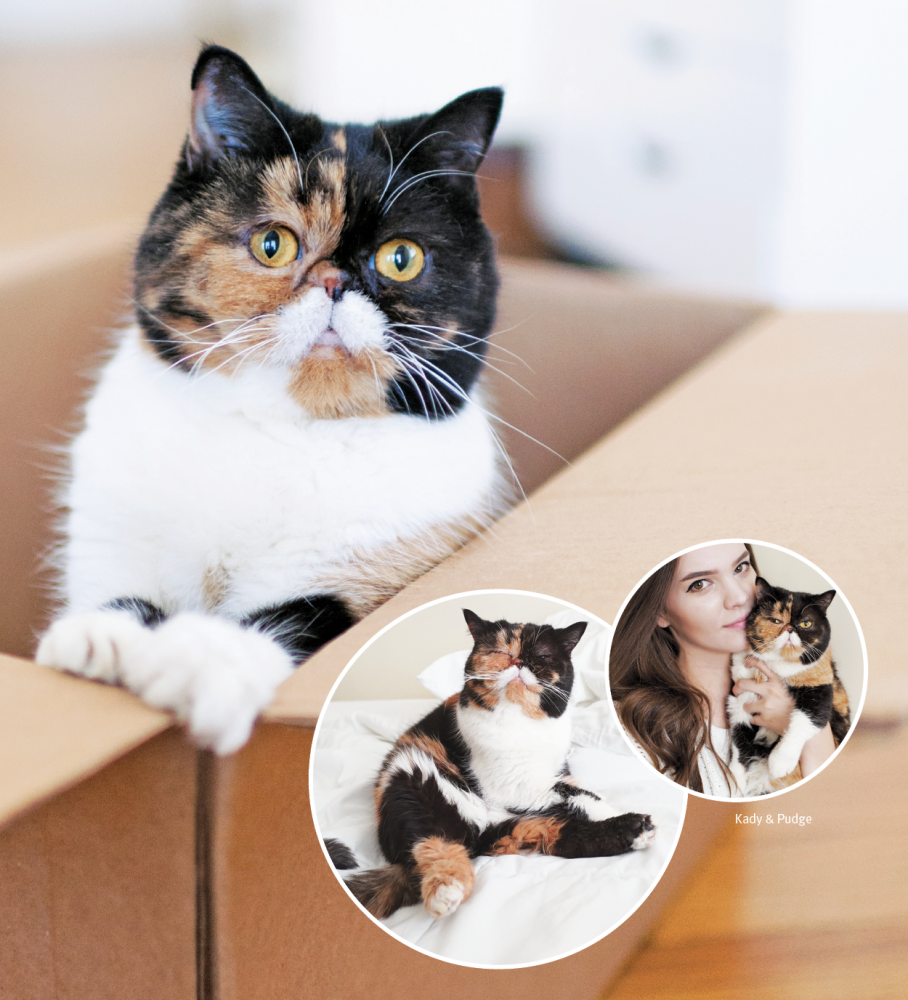 Q: So Pudge is clearly adorable and made for Instagram. How and when did you get started with her account? Was there a plan or did she just sort of take off in terms of popularity?
A: Pudge’s Instagram account actually started as just a regular account for myself in 2011 where I would occasionally post photos of her. I started getting random people following me asking me to post more photos of Pudge and the whole account just grew from there. About a year after I started my account, I decided Pudge had officially taken over and I changed the handle to @pudgethecat.

Q: Pudge has a ton of followers! Was there a point when you were like, whoa, things are getting crazy? Like a tipping point in terms of audience?
For the most part, her following has grown at a steady rate but there have been some hallmarks along the way. Pudge attended the first Internet Cat Video Film Festival in 2012 and there were so many people wanting to follow her—that was when I realized things were getting crazy.

Q: What are your tips for taking great cat photos? Every cat’s personality is different, but the approach I take with Pudge is not to stage photos. I like to capture Pudge just chilling around the house as she normally does. You don’t have to have a super nice camera—sometimes the best photos of Pudge are captured on my phone because she’s doing something super cute and that’s all I have on hand. However, having a professional camera that can shoot lots of photos in a second helps capture some pretty funny Pudge faces.

Q: How many photos do you usually take to get “the one?”
Sometimes if Pudge sneezes or yawns I can probably snap 30 photos in a couple seconds and I’ll get a handful of funny faces. I also take the approach of taking lots of photos of Pudge on one particular day and then having a bunch of photos to choose from for posts until I need to take more photos. Of course I’d have to say the majority of them turn out as “the one.” Pudge nails every photo, every time. 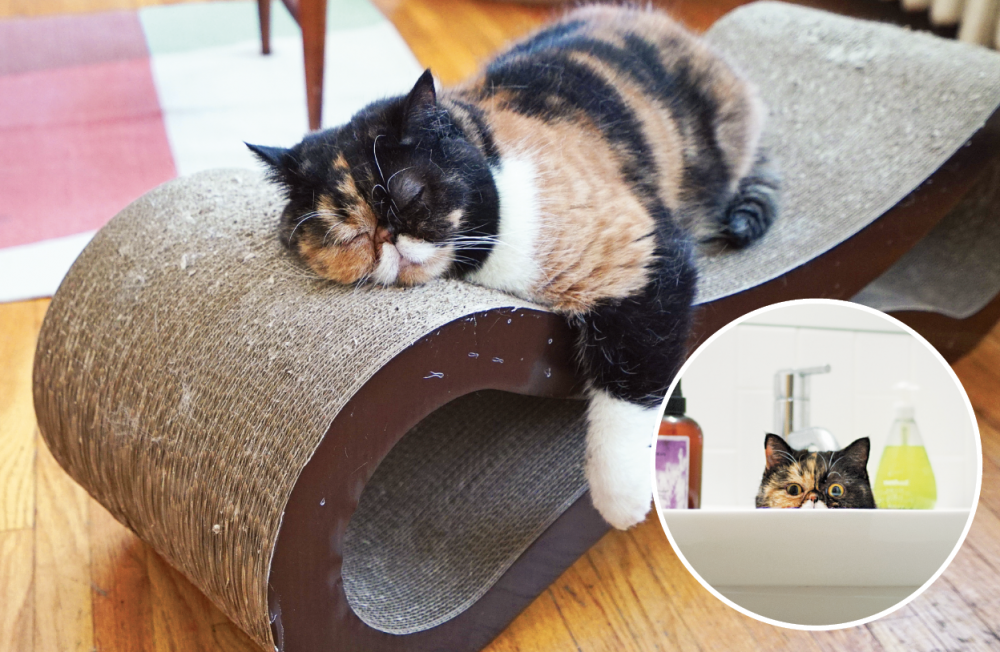 Q: What are your tips for creating a cat Instagram post that people will really like and connect with?
I think capturing Pudge in her normal day-to-day life has helped people connect with her. The photos feel more genuine to Pudge’s personality. Witty captions, maybe with some trendy hashtags, also help.

Q: Do you see certain themes in terms of what’s most popular?
Aside from baby photos of Pudge, which are always a hit, it’s hard to gauge what people are going to react the most to. Sometimes I’ll take a photo of Pudge and think the internet is going to love it only to see it get average response, and other times I’ll take a random photo of Pudge sitting in bed and the internet goes crazy.

Q: Your PIY crafts (Pudge It Yourself) on YouTube are so fun. How many followers do you currently have and what has been your most popular video to date? (We loved Pudge “helping” with your taxes!)
I loved doing the PIY videos, but they were sooo much work! I had two interns and a friend working with me on them every week, so I’ve kind of been enjoying a break from posting more videos.

The PIY pilot episode where Pudge did cat nail art received really awesome response, but the episode on how to make a cat tipi has since surpassed that episode. There’s some pretty adorable footage of Pudge playing in the tipi at the end.

She has over 20,000 YouTube subscribers, but I haven’t been as active posting videos there as I have been on Instagram, Snapchat, or Vine.

Q: How much time a day do you generally spend managing Pudge’s social media accounts? Is it your full-time job at this point?
Some days I might spend more time on it than others, but it is definitely a never-ending task that has taken over my life. I quit my day job in 2013 initially just so I could take a few months off during the holiday season to focus on shipping out orders from the Pudge store, but I ended up never going back!

I went to school for print design and my background in design and love for photography definitely helped Pudge grow into the celebrity she is today. I take all the photos of Pudge and design all of her merch, website, and social media assets.

Q: We know Pudge is an Exotic Shorthair. Is there a name
for her colouring/markings?
Yep! Pudge is an Exotic Shorthair with Calico colouring (and some very unique markings, from her half tan/half black face to her white mustache). Her mother was Calico and her father was a cream Tabby, so she actually has a couple orange spots on her with a little faint tabby striping.

Q: What is Pudge’s personality like?
Pudge is very much more like a dog than like a cat in a variety of ways. She’s very laid back and easy going. She sleeps at the foot of my bed every night, all through the night. She likes to go for car rides (and even air plane rides). In fact, she LIKES dogs but she doesn’t really like other cats. Aside from that she’s pretty independent and a bit of a sassy diva like your typical cat.

Q: What is Pudge’s ideal Saturday?
Sleeping in nice and late. Eating some breakfast around noon. Taking a nice long nap in the sun on the couch. Eating an early dinner around 4pm and finishing up the day being brushed in bed.

Ah, the life of a celebrity cat! 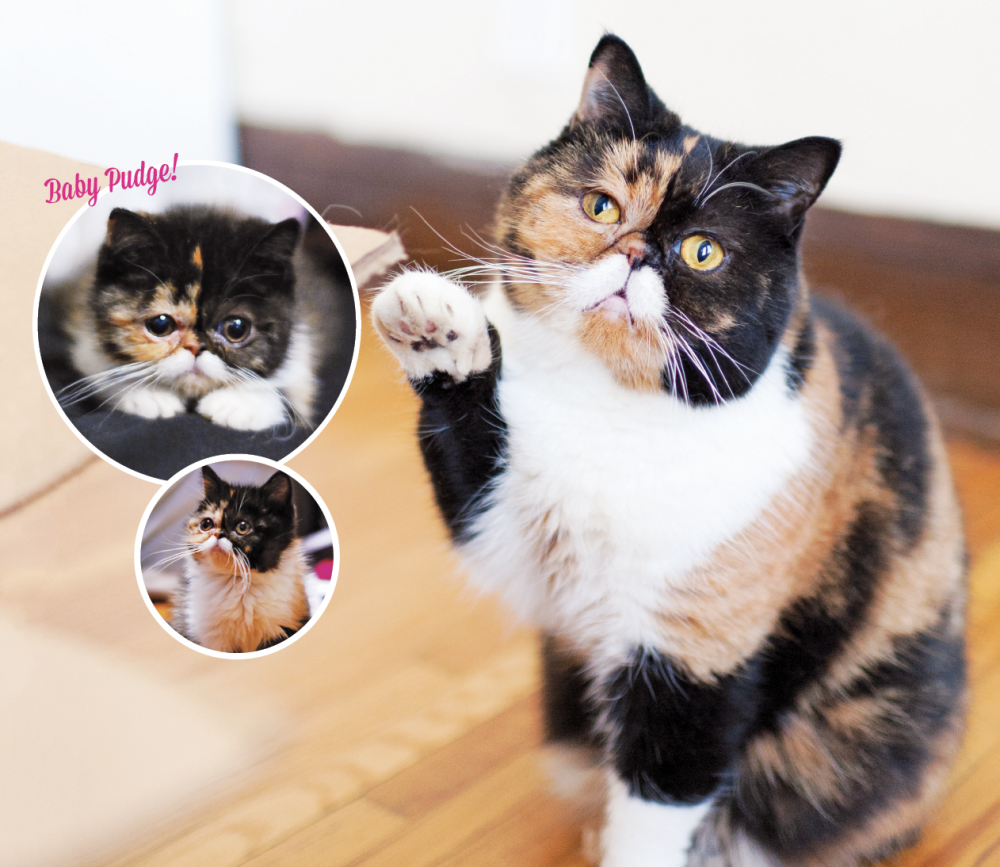 Meet Pudge at CatConLA this June!

Here’s your chance for a meet and greet! Pudge and Kady will be making an in-person appearance at this summer’s CatConLA event.

How does Pudge like doing events? “I’ve had a number of people ask me if I drug her during events or travel,” Kady says, “but that’s just how she always is.”

“Last year we had our meet and greet on the last day of CatCon and Pudge was tired from the busy weekend she mostly just wanted to sleep through her entire meet and greet! This year it will be on the first day, so I’m hoping she’ll be nice and well rested!”

Kady is also currently working on some no-doubt adorable merch she’ll have for sale at CatConLA. Expect some donut-themed Pudge items and possibly some socks and new sweaters!