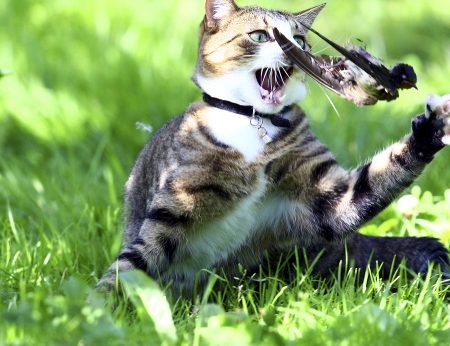 The Killers in Our Midst

Those who advocate for cats to be indoor-only have gained another argument for their side. Scientists from the Smithsonian and the Fish and Wildlife service have determined that the domestic cat is amonst the greatest threats to native wildlife.

Felis catus is responsible for the deaths of a median of 2.4 billion birds and 12.3 billion mammals, which is significantly greater than earlier estimates and outranks all other causes of anthropogenic threats (things like cars, planes and skyscrapers). The numbers are extrapolated from the twenty-one most rigorous studies that could be located; they include the impact of pet cats as well as feral and stray cats. Feral cat colonies are considered particularly disruptive, accounting for possibly 70% of the damage to wildlife. This has caused the debate to heat up between TNR advocates and those who are working to preserve local bird and small animal populations, including in Modern Cat’s hometown of Vancouver, where, yesterday, over fifty animal rights groups petitioned for new licensing laws to come into effect. This, of course, comes on the heels of one New Zealand man’s campaign to ban cats from the island nation.

What does Dr. George Fenwick, head of the American Bird Conservancy, suggest to help remedy this problem? It’s not cat prohibition – far from it. He advocates finding homes for homeless kitties, something that Modern Cat can get behind.