Cats fighting: 10 ways to know if it’s real or if it’s play

If you have two or more cats, you’ve probably seen your cats suddenly rolling around on the floor together, biting and kicking each other, and felt alarmed. Is it possible the behaviour you are witnessing is innocent play fighting or could it be true aggressive behaviour? Could your cats who were once best of friends have developed issues with each other?

Many cat owners often think their cats are truly fighting with each other when in fact it’s normal cat behaviour known as play fighting. They witness one of their cats attempting to pin the other cat down, biting the neck and bunny kicking the head. Even though the interaction can look worrisomely rough and a lot like real aggression, it can still be play fighting. A major difference between play fighting and real fighting is the intent behind the behaviour.

What is Play Fighting?

Cat play-fighting behaviour, also known as social play or mock aggression, is behaviour that appears to be aggressive, but without the purpose to harm the opposing cat. Some form of this pretend aggression is a normal part of all feline play. Interestingly, social play behaviour is present in almost all species. It would make sense that a cat owner would have difficulty discerning this social play activity from true cat-to-cat aggression—many of the postures and fighting maneuvers are the same that cats would display in an actual cat fight. However, even though the play may appear rough at times, it’s much less intense than a real cat fight. 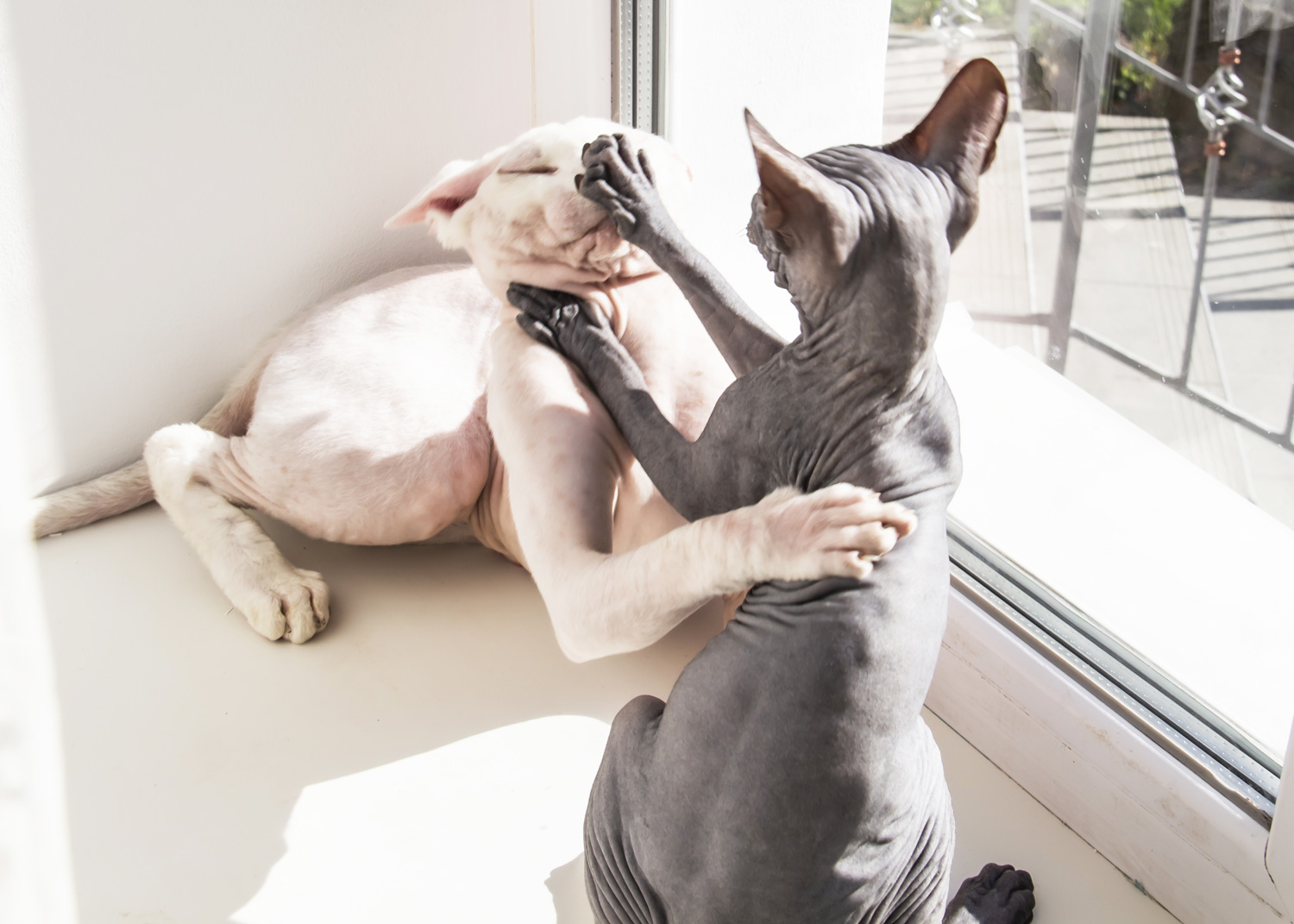 Play fighting is a form of communication between cats.

“If your cats are play fighting, let them be. Play—even when it looks like fighting to you—allows kittens and cats to show off their assertiveness and strength. It helps establish social ranking within the home and so smooths out territorial and social issues”.—Excerpt from The Cat Whisperer book

Kittens, from as little as four weeks of age to well into their juvenile stage of six months to two years, have an intense drive to sharpen their hunting skills. As part of their feline evolutionary biology and gene-encoded behaviour, they will have the need to practice several fighting and hunting motor pattern sequences multiple times a day. The stalk and chase, grab and bite, pounce and bite, and the “kill” bite are practiced over and over again. Once they move into adulthood, play fighting is still a normal part of their daily repertoire, but the frequency is usually less and more prevalent in the early morning hours or, like my own cats, after dusk. Adult male cats generally also have a stronger drive to play fight than adult females.

If play fighting behaviour between cats looks similar to real fighting, then how do you really tell the difference between the two? Looking at their social interaction when they are not play fighting is one way. Generally, if your cats get along well, the fighting you are witnessing is most likely your typical social play. Even cats that are not best of friends and simply seem to tolerate each other can still come together in the evening for a good play fighting session. Although play fighting can occur any time of day, cats are most active at dusk and dawn and you will often see more social play behaviour around these times. For young kittens and juvenile cats, it can be any time of the day and often. Play fighting can be a good sign that your cats are bonded and feel affiliated with each other. If your cats do not engage in play fighting it can be due to a variety of factors such as lack of proper socialization with litter mates as kittens, health issues, environmental stress, lack of a group scent, or they simply do not like each other. 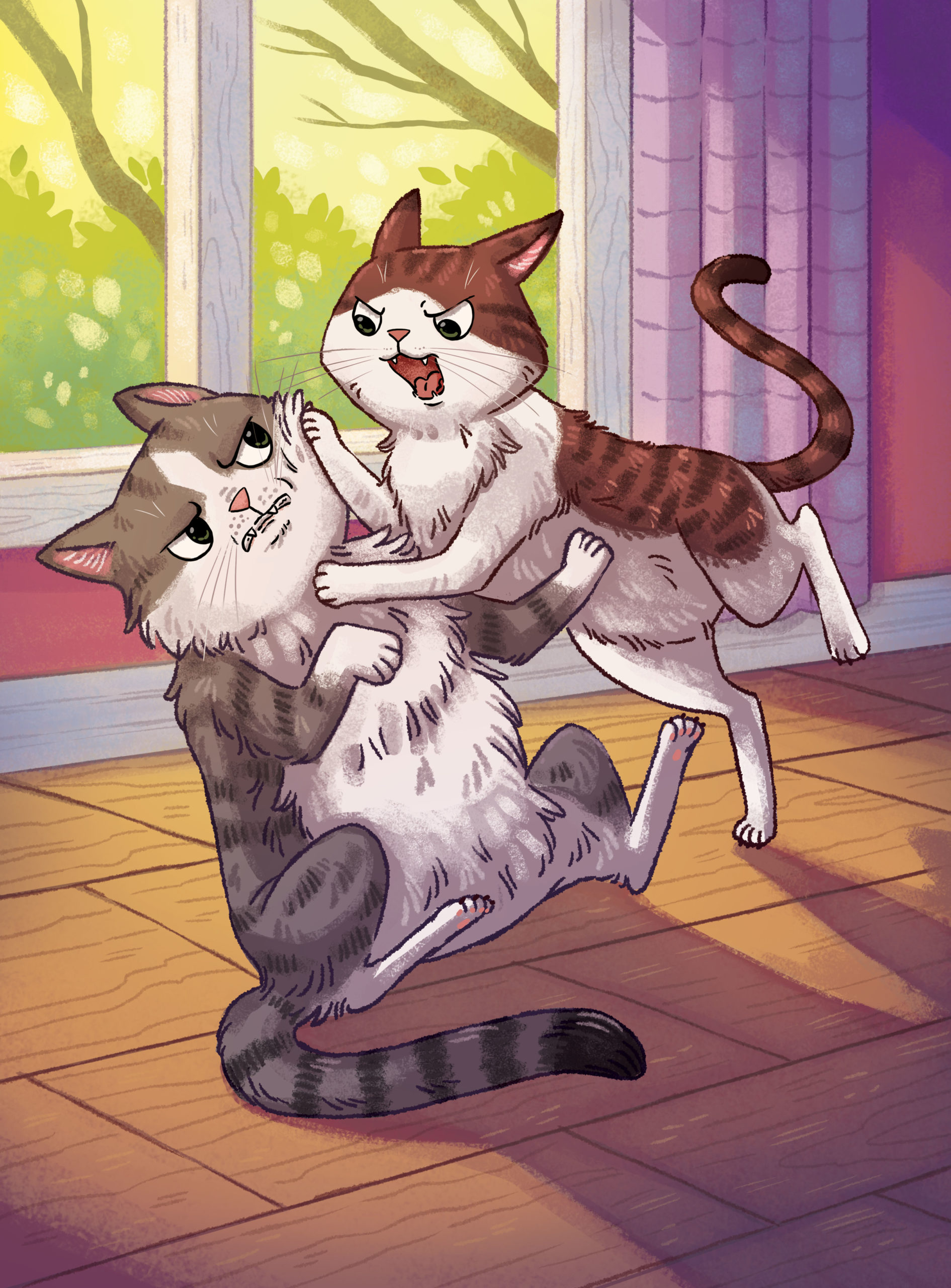 1. Ears, Tails, Claws, Eyes: A cat’s ears will almost always be in the forward or relaxed position (not pinned back against their head). Occasionally, you may see the ears go back, but this is usually due to keeping the ears out of the way so to not have them kicked or bit during the play fight. A cat’s tail can do almost anything during a play fighting episode. Both the victim’s and aggressor’s tails can lash and thump wildly. The claws may be out at times, but without the goal to inflict harm. Their pupils may or may not be dilated.

2. Body positioning: During most of the play time, you will almost always see the cats leaning towards each other instead of leaning away. Prior to the play fight you may see one cat partially hiding behind a chair, staring at the intended play fighting recipient.

3. Taking Turns: The pretend victim will lie on his side inviting the aggressor to make his move. The aggressor is usually sitting or standing approximately one to three feet away focused on the victim. The roles will eventually reverse, and the once-pretend victim is now the pretend aggressor. These roles may not necessarily be 50/50 due to different factors. A specific cat may be more dominant and become the play aggressor more of the time. It can also be that a cat who plays the victim more of the time may simply be too lazy to be an active aggressor. There are many more reasons you may not see your cats taking turns equally.

4. Taking Breaks: Cats will take several breaks during play fighting. You should not see constant activity. Cats will sometimes pause several seconds in between their next calculated move and a few minutes of no activity when they switch their victim and aggressor roles.

5. Vocalization: Generally, you should not hear any growling, hissing, yowling, or screaming.  Occasionally a hiss or yowl might happen if one cat goes a little too far and bites the other cat too hard. If one cat outweighs the other by a few pounds, this can also create unintentional overpowering and you may hear a shriek from the smaller cat.

6. Grooming: Approximately 35 percent of play fighting sessions begin with one cat grooming the other cat.

7. Cat Fur: The cat’s fur should not suddenly look fluffier than usual, meaning the fur on the back and tail should not be standing up on end.

8. Bite pressure: Occasionally a cat may become too excited and sink his teeth in a little too hard, but typically bite pressure should be light to medium. Play fighting is a way that kittens learn to inhibit their bite pressure with another cat. If they want the play fighting to continue, they need to not upset the other cat by biting too hard.

9. Relationship: If you would describe your cats as best of friends or even only somewhat friendly, play fighting can be a part of their daily repertoire. Cats that are merely familiar with each other and without a bad history will also play fight.

10. Time of day: Adult cats typically play fight during the early morning hours and any time after dusk. With kittens and juvenile cats, play fighting is frequent and can be any time during the day or night.

The next time you see one of your cats stalk, pounce, bite, swat, and ambush the other cat, don’t panic—it can all be due to natural play fighting behaviour.