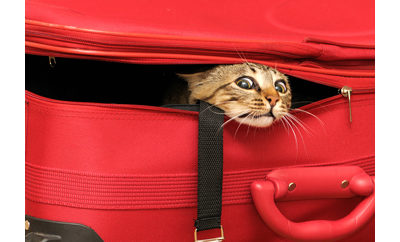 Cats are known to hide, a habit derived from their need to stalk and hunt prey. Bob-bob, of Circleville, OH, slipped into his companion Ethel Maze’s suitcase when she was packing up for a trip to Orlando. Bob-bob spent ten hours in the suitcase.  A baggage handler at Port Columbus International Airport reported that he thought he saw the bag move, but didn’t investigate further and loaded the bag onto the plane. Bob-bob was even x-rayed when the bag arrived at the security checkpoint.

He traveled all the way to Florida until Maze discovered her stowaway in her hotel. Sweaty and dehydrated, the cat was so stunned by the experience that Maze thought he was dead. Bob-bob revived on a towel and was happy to be reunited with his concerned owner. Now he has returned to Ohio in style, in his own airline-approved cat carrier, traveling under Maze’s seat. TSA representatives say they are not sure how Bob-bob got past them, but the cat is certainly glad to be out of the bag.