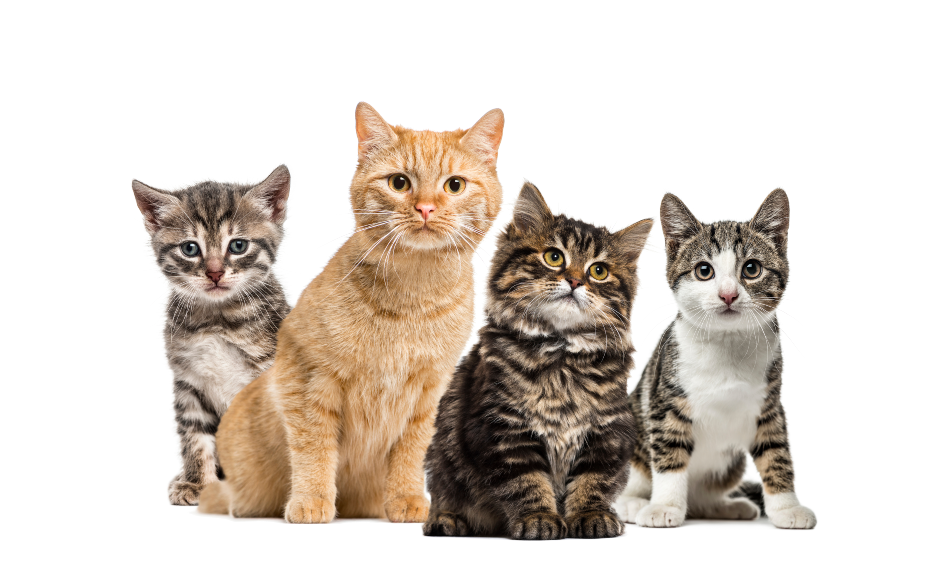 Wonder what historic breeds may contribute to your cat’s unique looks and personality? Read on to see if you can recognize any of these pedigree traits in your mixed-ancestry cat

The vast majority of cats—about 98 percent—are considered Domestic Shorthair or Domestic Longhair cats; in other words, cats without a pedigreed background. But some mixed ancestry cats do include a purebred cat in their immediate family tree. In shelters, some of the more common mixes you may see include Siamese cross or Maine Coon mix. If you take a close look at your cat, you may find a resemblance to one or more of these historic breeds. Read on for a summary of prominent features and personality traits to look for. 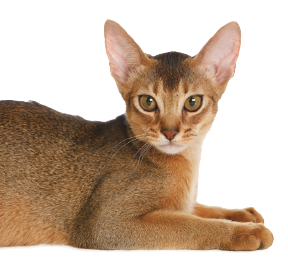 Though named for the country where the historic breed was thought to have originated (know as Ethiopia), recent research indicates the Abyssinian actually came from Egypt. Sleek and strong-muscled, this is a medium-sized cat with a truly regal look. He’s known for his silky, ticked coat—a genetic variation of the tabby pattern in which hairs are light at the base and grow darker towards the tip. His ears are prominent and held high, complemented by expressive almond-shaped eyes that come in a variety of colours. 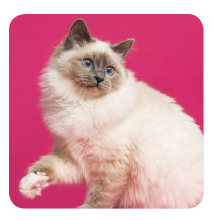 This medium-sized longhaired cat has a silky pointed coat, piercing blue eyes, and white socks. The origins of the Birman are somewhat of a mystery, but he is sometimes referred to as the sacred cat of Burma and may have served as a companion to priests there in the past. With his gentle and loving disposition, it’s easy to imagine him serving in that capacity. 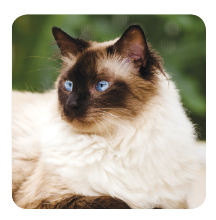 This historic breed is very similar in type to the Persian, with the notable exception of its striking blue eyes and point colouration—the result of interbreeding between Persian and Siamese cats. The Himalayan has a round body and shorter legs, so he is not known as a high-jumper. Himmies are highly social and, owing to their Siamese influence, are active and playful cats. 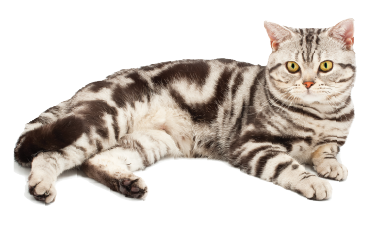 Considered America’s native shorthaired cat, this popular breed’s origins trace back at least to the crossing of the Mayflower, where cats were brought on board to hunt rats. Some of these cats jumped ship in the New World and managed to adapt to their surroundings and climate. Though similar to many shorthaired cats, the pedigreed American Shorthair distinguishes himself by being bred to a standard of type and temperament. This playful breed is known for its sweet disposition and amiable nature around children, dogs, and other cats. 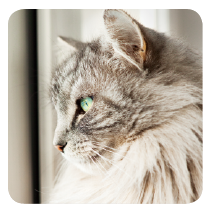 This cat is a national treasure of Russia, having been documented for centuries and even mentioned in fairy tales and children’s books. Medium to large in size, his coat has developed to adjust to a harsh climate and is dense, medium to long in length, and water repellent—the latter of which comes in handy because, believe it or not, the Siberian is known for his enjoyment of the water. A very acrobatic breed, the Siberian is a powerfully-built cat and a true high-jumper. 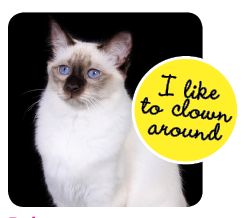 With his pointed colouration and those sapphire blue eyes, it’s no surprise that this cat owes his origin and good looks to the Siamese. However, he is distinguished from his forebears by a silky coat that flows out to a plume-like tail, and he’s a little more soft spoken than a Siamese. Regal in appearance he may be, but the Balinese is widely regarded as one of the biggest clowns of the cat world—playful, inquisitive, and loving. 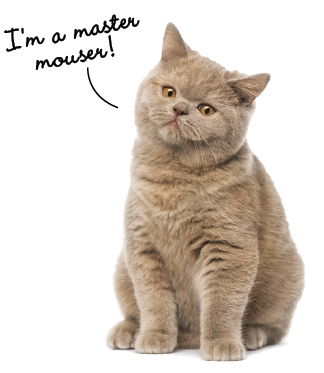 England’s oldest cat breed was actually first a valued member of the Roman Empire, where he was a prized mouser. That same skill earned him a place in the streets and homes of England, where he was further developed over the centuries. His calm and easygoing nature matches the teddy bear look given by his large, round eyes, often copper in colour. A medium to large size, the British Shorthair comes with a dense coat in a number of colours and patterns, though the most familiar is the bluish-gray coat. 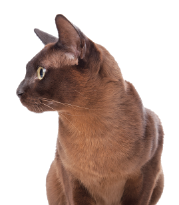 In 1930s San Francisco, a doctor returned from Burma with a small dark-brown female cat that he bred to Siamese cats. The result of his efforts was a sable-coloured (dark brown) cat that led to the development of the Burmese. While originally all Burmese cats were sable, the historic breed now comes in a wide variety of colours. This breed’s eyes are very large and expressive, and have won many a cat lover’s heart. 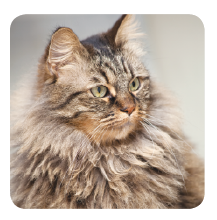 Sturdy, rugged, and very large, this is the gentle giant of the cat world. A longhaired breed native to America, his long and flowing coat has a silky, almost oily texture, and comes in literally dozens of colour combinations. His tail is another recognizable feature—extremely large and heavily plumed. Intelligent, sweet, and a world-class mouser, the Maine Coon is a well-rounded cat. 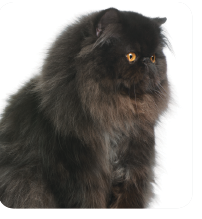 The name suggests this breed originated in Persia, and records show the breed was exported from that region in the 1600s. However, ancient Egyptian drawings bearing resemblance to this breed have many questioning just where he originally came from. This popular and historic breed is known for its luxurious coat, large eyes, and flat face. It comes in an array of coat colours and patterns: solid colour (white, black, blue, red, cream), silver and golden, shaded and smoke, tabby, parti-colour, calico and bicolour, and Himalayan.
His legs are short but heavily boned, so he’s not the most athletic of cats. He is, however, a world-class cuddler. 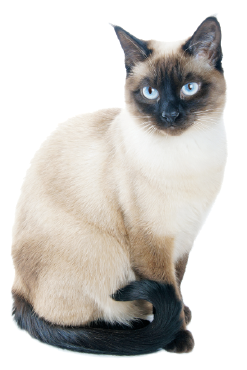 Believed to be descended from the sacred temple cats of Siam, from where they were exported in the late 1800s, this is one of the world’s most popular and recognizable breeds. The aristocrat of cats, the Siamese features sleek, long lines, deep blue almond-shaped eyes, striking point colouration, and a wedge-shaped head. The Siamese is the chatterbox of the cat world, known for his loud vocal machinations. 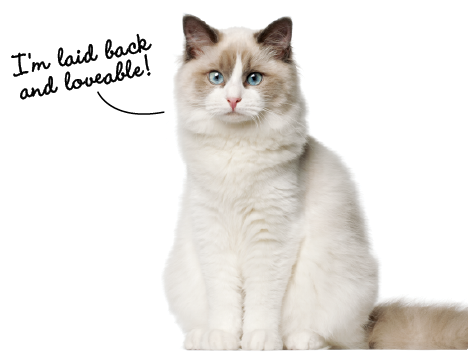 A California breeder in the 1960s used street cats to develop a type and temperament for a feline that would be large, lovable, and laid back. In time, that type was established and today’s Ragdoll is a large and muscular, semi-longhaired cat with blue eyes and an affectionate disposition. He comes in three colour patterns. The Ragdoll is not much of a jumper—he’d rather follow you around the house and will most likely help you greet guests at the front door.

This historic breed originated on the Isle of Man, where Manx cats are also referred to as stubbins. Most Manx are born without tails—a genetic mutation most likely caused by the limited cat population. The beed has a dense, plush double coat, and, while the island’s original cats were shorthaired, longhairs were introduced during the time of the Vikings. The Manx’s back appears rounded because his hind legs are longer than his front. This also gives the Manx plenty of strength and agility. His head and large eyes are round, and his ears are quite wide, tapering to a fine tip. 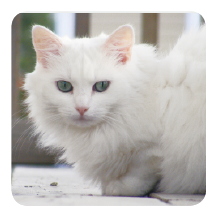 Documented as early as the 1600s, this ancient breed originated in central Turkey’s Angora region. The breed’s soft and silky coat is its trademark, and this breed is widely considered to be the origin of the mutations for both white coat colour and long hair in cats. The Turkish Angora was used extensively in the development of the Persian.

If you want to know for sure if any of these breeds make up your cat’s ancestry, check out this DNA Testing Kit For Cats! 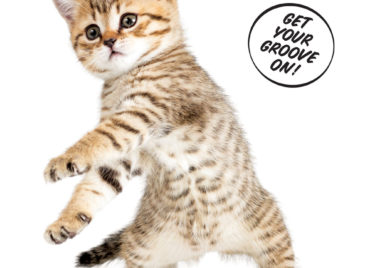 Cat Culture Spotify Will Generate a Playlist For You... 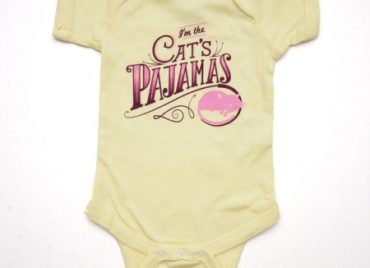