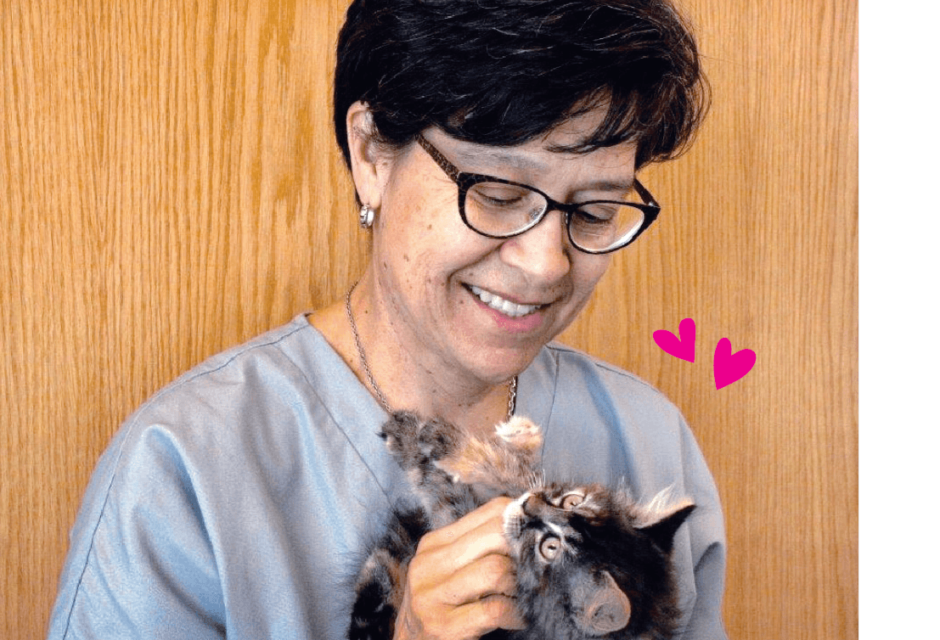 The endlessly inspiring Dr. Patti threw herself into helping the pets of her community and hasn’t looked back

It was the coldest December that shelter veterinarian Dr. Patricia Canchola could remember. It had snowed a wet, heavy snow the night before, and cold winds howled through the streets of Pueblo, Colorado.

On a routine garbage pickup route, a trash collector thought he heard a crying baby. Following his instincts, he jumped into the back of the truck’s compactor area and began to dig. Out rolled a tiny kitten, who had been picked up while searching for food in a dumpster. 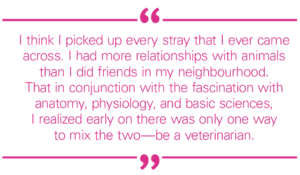 Completely shocked at his find, the worker rushed the non-responsive kitten to Pueblo Animal Services, where Dr. Canchola was working. Although greasy smelling, ice cold, and very hungry, the two-pound kitten had miraculously survived the rotations and compressions of the garbage truck. “After several warm, soapy, sudsy baths, she still smelled far from a rose and was still non-responsive and freezing,” remembers Dr. Canchola, who is known affectionately in animal welfare circles as Dr. Patti. “We pull out all the stops with supportive care. I figured we had nothing to lose and everything to gain but only morning would tell. [Come morning,] as I walked closer to the nursery, I knew her fluids were still running as the alarm was not beeping. As soon as I turned on the light, the loudest hungry cry met me at the kennel door.”

The kitten bounced back. “She took full advantage of her cozy quarters, ate what we left with her overnight, and was ready to hit the ground running,” says Dr. Patti. That two-pound kitten was given the name Ruby. She was a hit with the staff and the media, who were captivated with the story of her amazing rescue.

“Before we knew it, all the major TV stations in Pueblo and Southern Colorado were lined up to meet ‘Ruby in the Rubbish,’” says Dr. Patti. She made a full recovery and was adopted, her happy ending thanks to Dr. Patti and her team.

Dr. Patti has always had a soft spot for hurt and stray animals. Growing up in Pueblo, she was a magnet for local strays.

“I think I picked up every stray that I ever came across,” she laughs. “I had more relationships with animals than I did friends in my neighbourhood.” Her parents not only allowed young Patti to bring home stray dogs and cats, but engaged her in games of ‘pet doctor,’ where she would pretend to examine, diagnose, and treat sick stuffed animals. There was a “definite desire to nurture, rehab, and care for strays, be they hungry or injured,” she says. “That in conjunction with the fascination with anatomy, physiology, and basic sciences, I realized early on there was only one way to mix the two—be a veterinarian.”

So perhaps it’s no surprise that little girl grew up to be a strong, confident, and hardworking animal doctor who would come to be named one of America’s best. Last year saw Dr. Patti chosen from hundreds of nominees and named the Hero Veterinarian winner at the seventh annual American Humane Hero Dog Awards.

A graduate of the Colorado State University College of Veterinary Medicine and Biomedical Sciences, she worked in Yankton, South Dakota and Lakewood, Colorado before landing back in Pueblo. After plans for her own state-of-the-art clinic unexpectedly fell through, she happened to hear about an opening for a full-time vet at Pueblo Animal Services.

Private practice and shelter medicine are as different as cats and dogs, says Dr. Patti. “Once I ventured into shelter medicine, I was stunned and shocked to find out what goes on in the community. When I looked at the thousands of strays that entered our shelter, I couldn’t help but wonder, where in the world are they coming from?” She dug in and saw “cruelty and neglect cases, geriatric surrendered pets, litters and litters of kittens, feral cats with injuries and illnesses, cats and dogs hit by cars or mauled by other animals. I had entered the kingdom where a whole new beast was waiting.”

Grievously injured cats find their way to her shelter’s doorstep all the time. Earlier this summer, a stray cat suffering from lethargy and vomiting was brought to them. Dr. Patti and her staff found a blockage in his intestine. They were able to remove eight inches of bowel and treat him for his illness before reuniting the cat, named Apollo, with his rescuers. In another case, a kitten, found stuck in a machine at the local power plant, was brought to them with a crushed limb. “How she managed to find her way into a huge machinery shop,” Dr. Patti still doesn’t know. “Her front limb was caught in the machinery making it impossible to move,” she continued. “It’s estimated she was stuck for a few days. When she was presented to our surgery center she was dehydrated, malnourished and had a serious crushing injury to her front limb requiring amputation.”

The kitten recovered from her wounds quickly, says Dr. Patti. Adopted by a Vietnam veteran and his wife, the cat was named Cosette after the heroine in Les Miserables. “Cosette is living the life of the musical she was named after,” her mom says, “she wants for nothing and is in our safe keeping.”

Pueblo itself sees a lot of poverty, which doesn’t help its stray animal situation.

It’s one of Colorado’s top three cities for unemployment and has an average income of just $30,000. Pets become the unintentional victims of the high poverty levels. “It’s still a little bit shocking and I’m still a little bit surprised when I see the high number of animals that are lost, wandering, and displaced,” she says.

With very little discretionary income, pet food and pet care end up at the bottom of the totem pole, says Dr. Patti. At the shelter, the top two reasons for owners surrendering their pets are well-known: the inability to provide medical care and food for their pets. After wondering what she could do to help people keep their pets in the home, the St. Martin’s Well Pet Clinic—a Saturday-only, non-critical, non-emergency clinic—was born.

Named for Dr. Patti’s first shelter dog, Marty and St. Martin de Porres, a patron saint of animals and the patron saint of charitable acts, St. Martin’s Well Pet Clinic opened in April 2010 and has since extended its hours due to demand. It is run completely by volunteers. When Dr. Patti mentioned her idea, her vet clinic clients, who have since grown to become close friends, stepped forward to volunteer their time.

The clinic operates on a sliding scale. “If they can’t afford it, we figure it out,” says Dr. Patti. “We make it happen. Whether [the contribution is] a dollar, two dollars, three dollars, I think it gives a sense of pride that they were able to do something for their pets.”

Frequently, Dr. Patti would see strays come into the shelter with their ribs on   display. It broke her heart. “That’s hunger at its worst,” she says. So Dr. Patti founded a non-profit pet food bank, called Amazin’ Amos Pet Pantry, to help hundreds of local families feed their pets every year.

But for all the good work she’s done in the community, Dr. Patti doesn’t see an end in sight. “We know many situations will never change so we plan on being around to help,” she says. “We don’t see it as giving up our Saturdays.”

That generosity is not lost on others. “I’ve developed a great deal of respect for shelter veterinarians over the years, and what they do behind the lines is one of the less glorious aspects of being a veterinarian,” says Dr. Mike McFarland of the pet company Zoetis. “It’s hard to imagine a more compassionate and dedicated professional than Dr. Patti. I can’t think of anyone who deserves this award more.”

Indeed, one of the least glorious aspects of Dr. Patti’s work is the abuse cases she sees.

As soon as she started working in shelter medicine, Dr. Patti found herself in court on a consistent basis, working side-by-side with animal law enforcement every day to bring animal welfare cases to justice. She felt it was crucial to present information with a scientific, forensic approach, so she took as many online courses surrounding animal cruelty, court etiquette, and forensics studies as she could, eventually earning a certification. Having been involved with “more cases than I’d like to count,” Dr. Patti has helped bring down penalties from monetary fines to extended prison sentences. “To be the advocate and the voice for those who have become the victims of human indifference and hate is the hardest part of my position, but the most important,” she says. “It helps knowing my voice for the pet was heard, but sometimes, the emotion comes out at home where I can release the frustration and tears.”

While there are happy endings like Ruby’s, Cosette’s, and Apollo’s, there are still many other cases that don’t end so well. “Wherever there is spousal abuse or child abuse, I can guarantee if there’s a pet in the home, he or she is also the victim of abuse and more times than not it does result in death.”

She hopes that with continued education centred around responsible pet ownership, that there are fewer cases of neglect and abuse. Until then, she is determined to keep working on behalf of the animals.

When asked what other projects she has up her sleeve, even the tireless Dr. Patti is, understandably, at a loss.

“I don’t know what I could possibly do next as I seem to use up all my spare minutes helping pets and families,” says the 55-year-old. But two months ago, she started the paperwork to convert St. Martin’s into a non-profit entity. “There is such a need for minor surgical procedures and dentals in the community,” she says. “Once our non-profit status is granted, I plan on submitting requests for grants to purchase equipment that would help provide such services. We should be hearing some good news any day or week now.” And to think that all this started because she accidentally stumbled into her job as a shelter veterinarian. “Had I not stepped into the area of shelter medicine, I would never have realized the need for basic preventative medicine and pet food,” she says. “I know what my pets mean to me and so I would hope that I have a deep sense of empathy for what families are going through. Being able to help them when I can and however I can makes my heart happy. I truly believe it takes a special kind of person to be the voice for the voiceless and I feel as though this is my calling.