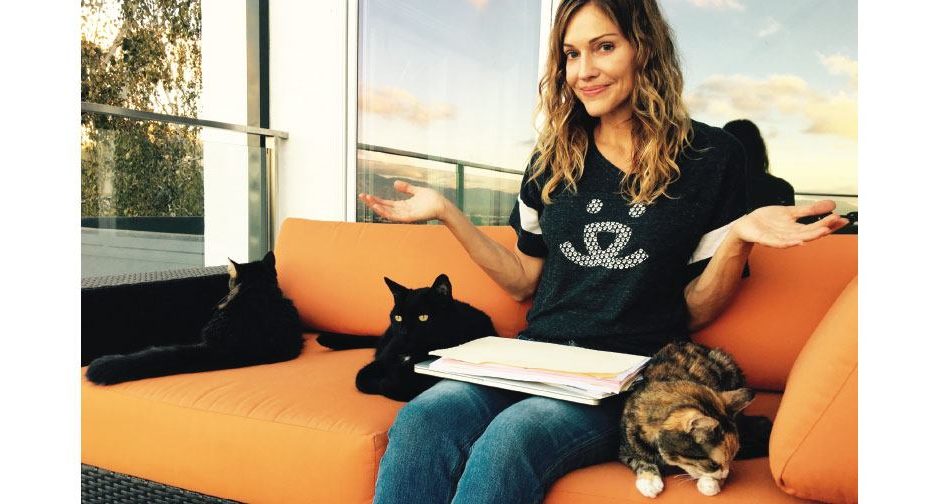 (and she wants to help you understand them too!)

Q: I have a six-month-old male kitty that loves to cuddle before bed. However, he gets as close to my face as possible while we’re dozing off and insists on putting his paws on my face! He’s not being mean and scratching, but he insists on keeping his paw there no matter how many times I push it away. I love to cuddle with my Jinxy boy, but I have woken up with slight scratches on my face.
A: Ah yes, the face cuddlers! This is actually quite common and, I think, a sign of love. He wants to be as near to you as he can get. If you look on my Instagram (@officialtriciahelfer), you’ll see I have a face cuddler, Rigby, who likes to plop his 18-pound body on my face and use it as a pillow. Another of my cats, Fiona, likes to be on my chest with her nose up against my chin. My Prissie has a habit of biting my nose if she thinks I’m not getting up early enough. It’s these little quirks that make our cats individual and funny. There’s not much you can do besides not allowing your cat in the bedroom with you when you sleep. If you don’t want to do that, definitely keep his nails trimmed—probably once every two weeks. He may grow out of this habit as he gets older, but that’s not guaranteed. 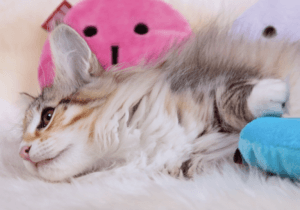 Q: My one-and-a-half year-old kitten Hades is always bringing me his toys and has to sleep with no less than four toys. I know cats will often bring their humans their “kills.” Both my boys are indoor cats as we live in an apartment. My question is: Is this my cat’s way of providing for me? He does that funny meow to get my attention and won’t leave until I acknowledge the toy or present.
A: This is absolutely him playing and bringing you his prize. I have a boy, Rigby, that deems it his mission in life to bring me my pilates reformer foot straps. He thinks they should be by me all the time; no matter how many times I take them back downstairs to my gym, he goes and gets them for me and brings them to me and drops them at my feet, all the while loudly letting me know he’s doing it. I give him a “good boy” and some petting, and he shines with pride. 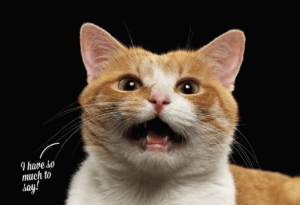 Q: I have a 14-year-old female cat that has started caterwauling. She has never done it before and it is very loud. Possible cause and how to stop it? She is not sick, eats and drinks, and uses the litter box as usual. Plays like a kitten!
A: If she’s never done it before then it could be a sign of illness. You say she’s not ill, but she may just not seem it yet! If you haven’t had her checked out by a vet and given a physical, I would do that—it could be a sign of thyroid or kidney disease developing. Or, it could just be age; have your vet also check your cat’s hearing and vision. Oftentimes as cats get older they start to yowl, especially at night. She could be starting to have some sensory (sight, hearing) decline and is a little disoriented and confused, which causes cats to vocalize more. Older cats can also start to have some dementia, called cognitive dysfunction syndrome, which is another cause of loud yowling. If it turns out to be something physical, like hyperthyroidism then medicine can help.

>>>> Night-time Tips for Cats With Cognitive Dysfunction
Dementia-like behaviour in older cats is called Cognitive Dysfunction Syndrome (CDS) and can affect your cat’s sleep cycle. Your cat may nap more during the day, leaving her awake and possibly restless and anxious at night when you are sleeping and unavailable to offer her attention. If your older cat is showing symptoms of cognitive dysfunction, such as nighttime vocalizing, making her as comfortable as possible can help. Offer a number of warm, draft-free resting spots—as cats age they are less able to regulate their body temperature. Plugging in a nightlight can help cats with declining vision navigate in the dark. And a radio left on low volume may comfort her when the rest of the family is sleeping. 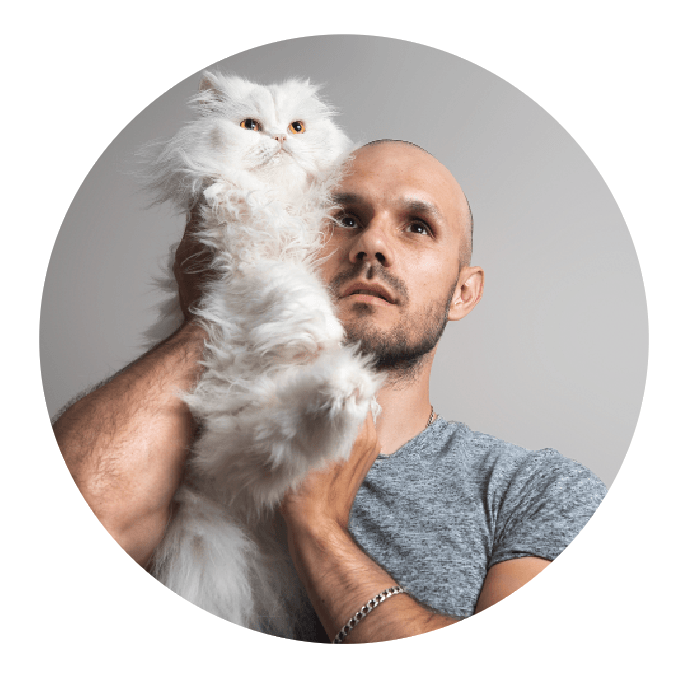 Q: My boyfriend and I adopted our four-and-a-half-year-old female cat when she was six months old. She started out shy but warmed up to him before me. Then, sometime around her turning one, she didn’t want anything to do with him and still avoids him when she can. She is definitely a mama’s girl, but my boyfriend is so sad she doesn’t want to be around him anymore. We tried having him take over feeding, playing, and treat giving, but once she gets what she wants she goes back to avoiding him. Any idea on how or why she acts this way even though she’s been raised by us both?
A: Animals, just like humans, have their own quirks and strong personalities. Your boyfriend hasn’t purposely harmed her, but maybe there was an accidental tail stepping or something that has triggered an “I’m staying away from you” feeling for her. Likely though, she’s just matured into a cat that is drawn to you more. I have one, Max, that would have nothing to do with my husband for the first four months after we adopted him, and then, from one day to the next, suddenly wouldn’t leave him alone; it was almost like I didn’t exist and Max wanted to spend all his time with Jonathan. So it could just be phases of her life and what she’s feeling at this time. You both should continue to take care of her and definitely he should continue to play with her. She’ll know you both love her. Maybe you should adopt another cat that might be drawn more to your boyfriend! 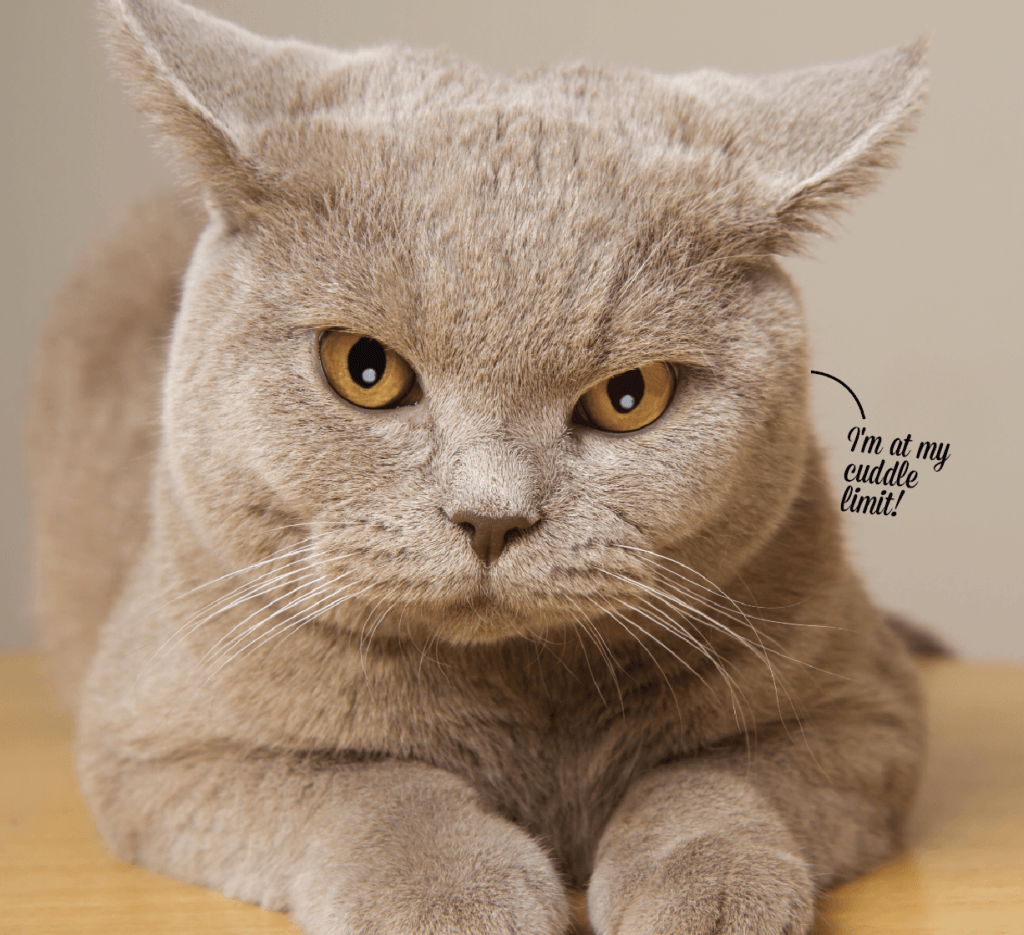 Q: Vince (two-year-old neutered male) is very, VERY affectionate and will push his way into my hand for strokes. He purrs and dribbles while I stroke his head and then, out of nowhere, he attacks me. Not all the time but more times than I’d like and he’s drawn blood from my face several times. It’s as though he suddenly gets mad because he hisses when I put him down afterwards. I suspect he gets overexcited and lashes out. I don’t love him any less but he’s a big 13-pound muscle-y cat, and he’s got a hell of a whack on him. He attacked the vet in the same way even though the vet was warned but stroked him eagerly and got a face full of claws after a minute or so. How can he be so happy one minute then attack the next? We aren’t touching his tummy or anything, just his head, and he’s not hurt, just a little highly strung! Anything we can do?
A: It sounds like Vince is the type of cat that gets over stimulated. He loves the attention but then snaps, or lashes out as you say, and attacks. If the vet says there’s nothing physically wrong, then it’s behavioural or emotional. I had a friend with a cat like that and it was jarring, but ultimately it was the person that just had to be aware and not let their face get too close. Try to not over-actively pet him. If it’s overstimulation, softer petting for a much shorter period of time should help. Definitely avoid vigorous or lengthy petting, even if it’s just to the head. Try that and see if it makes a difference. Otherwise, that’s just him and you’ll have to learn to continue to love on him, but be aware so you don’t get hurt. Whacks to the face are never fun. (And keep his nails trimmed!)

Here are 11 more tips to deal with your cat’s behavior! 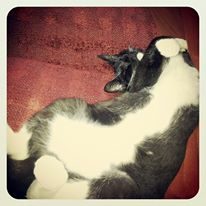 Behaviour Ask Lyle – These Feet Were Made Fo... 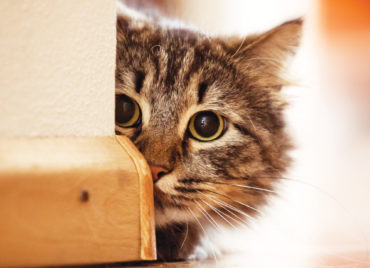 Behaviour Why Your Cat Needs to Play and How To Do...
Comments (4)