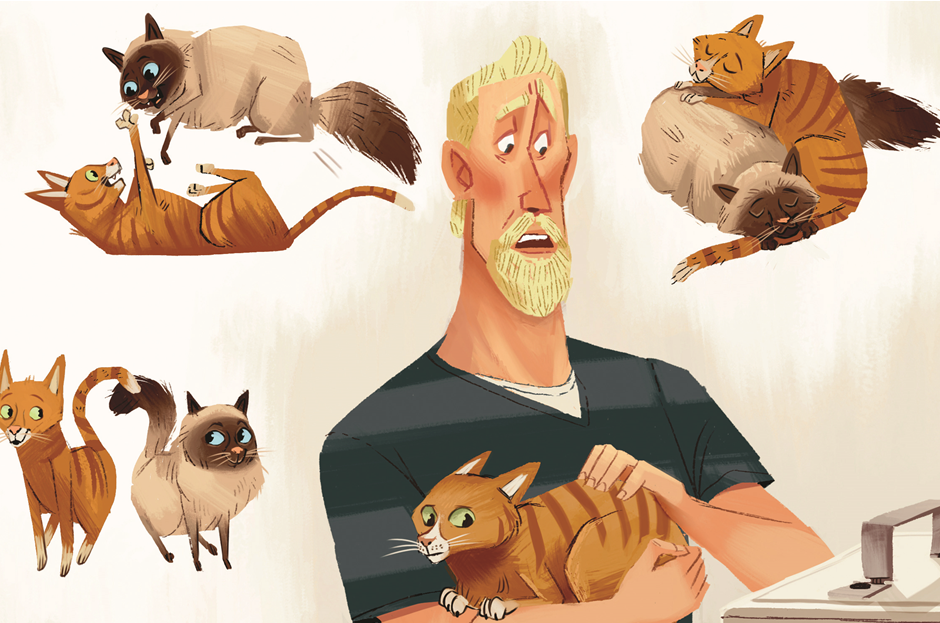 Company for Your Cat?

The benefits and challenges of a multiple cat home

At a friend’s home, you watch as her two young cats play like fiends, chasing each other, batting ping-pong balls, and having a grand time of it. Then, tired, they settle down together in a heap and go to sleep. On your way home, you can’t help but think: is my solo cat missing out?

The short answer is: it depends on the cat. Some will take to a new feline companion fairly quickly and enjoy the camaraderie, while others will hate the intrusion and wage bloody war on the interloper. That’s the nature of cats, a species that leans toward the stoic, the independent, the self-sufficient. Cats are supremely territorial and often loathe to share space with other pets. And they abhor change, which is what a new cat definitely amounts to.

That said, some cats are more socially inclined than others. Shelter cats who have spent lots of time with others before being adopted will often accept a new feline into the home, as will naturally friendly cats who don’t seem to mind who comes and goes. And kittens usually have little problem socializing with others, particularly other kittens (more on that later).

The key question to ask before proceeding is: why are you considering a second cat? If it’s because you think your cat would be happier with the company, understand that you are applying a human perspective to the situation. Though we might hate being alone ten hours each day, most cats do quite well with it, and even prefer it that way. But, if it’s simply because you want the extra company or would like to rescue a cat from the multitude facing euthanasia in an overcrowded shelter, that’s at least a fair and/or noble answer. And, in many cases, it’s something you can make work.

So, then, you want a second cat, for you. Okay. Now the issue becomes: can it be done? The answer is probably, though it will depend very much on your resident cat, on the new cat, on the available space, and on how well you set your home up beforehand. First, take stock of your cat. Is she friendly toward guests? Has she interacted with other pets in a civil manner? If so, the odds are good that a new cat will eventually be accepted by her. But, if she was once a stray or a feral cat, has a history of fighting, or has lived for a long time on her own, then your job becomes harder. Does she hide when guests come, only to resurface an hour after the last person has gone? If so, the idea of getting a second cat becomes a riskier one. Now, look to your home. Is it a one-room apartment or a spacious house? Small areas make socializing two cats harder, because they covet territory and won’t stand for constant invasions into their space. In a large home, even two cats hostile to each other can find space to live and to avoid each other if need be. But in a small space, two angry cats are likely to brawl.

Cat lovers who desire two cats do best by getting two kittens, right at the beginning. Kittens who grow up side by side almost always get along well and will amuse and exercise each other throughout the day. Two littermates from a shelter are the ideal choice here.

If you have a young cat at home and want a second, consider adopting one kitten of the opposite sex, as same-sex cats are much more prone to fight each other for dominance. Your resident cat will still be young enough to recall having fun with her littermates, and the new kitten will be more than happy to oblige. Even if your resident cat is an adult, selecting a kitten of the opposite gender for the new pet is highly recommended, as her youth and low stature will guarantee that few territorial disputes will take place. The older cat will read her the riot act quickly, and set the tone for future relations. 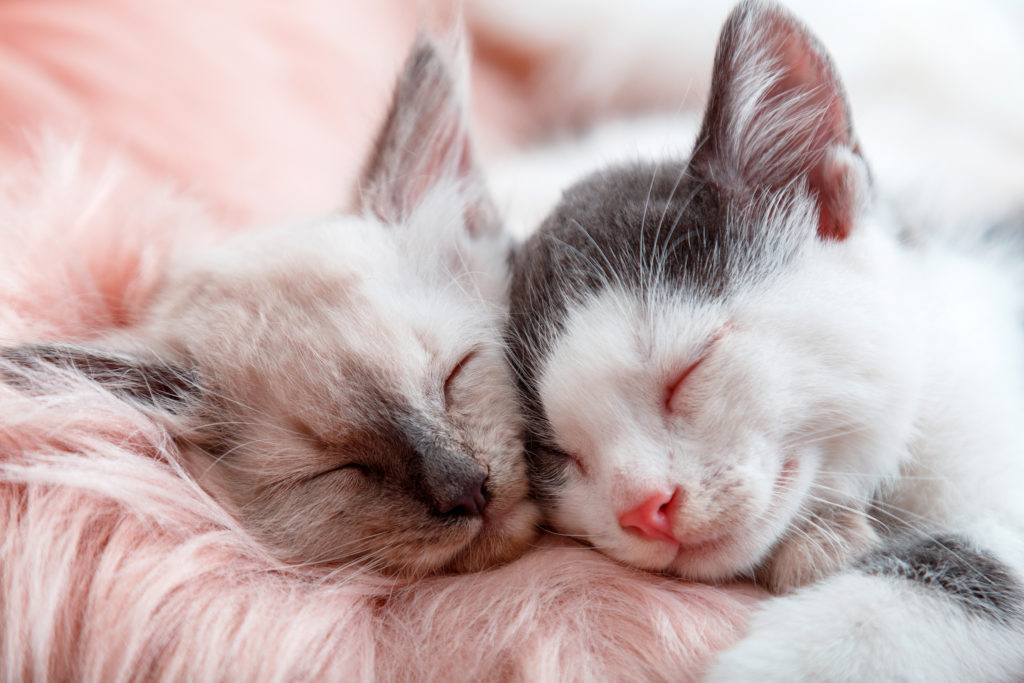 have well-established personalities and won’t change overnight just to accommodate a new competitor. If your resident cat has a shy streak, you might exacerbate the issue by bringing in number two. If the home cat is a somewhat pushy, territorial character, the second cat might end up walking into a buzz saw of resistance. In this situation, it could literally take a year before peace reigns again.

If, however, your resident adult cat has a history of social harmony with other cats (or even a dog), bringing in another sociable adult could work, provided you alternate gender (same sex pets fight more), have a large enough home, and introduce them in the right fashion. If you do add an adult cat of the same gender, expect some initial fireworks, and then a substantially longer period of time for the two to integrate.

Cats revere territory. They patrol it, mark it, defend it, lord over it. In this, your domestic cat is not much different than a lion. Bring a new pet or person in, or even change the layout of your home, and your cat could act out in many ways, including hiding, aggression, marking, destruction, or incessant vocalization. That’s why it is crucial to have enough space available if you’re going to bring in a new cat. For two cats, try to have a minimum of a 1000 square feet of space in your home, and more if possible. Multiple floors and assorted open rooms will help the cats establish their own “sub-territories” within the home, so open things up as much as possible.

Certain cat breeds tend to be more sociable than others. These include the: Tonkinese, Sphynx, Burmese, Cornish & Devon Rex, Balinese, Siamese, and Havana Brown. These active, playful cats will stand a better chance of getting along than will more shy cats, such as the Persian, American Wirehair, Scottish Fold, or Angora. And, though exceptions abound, short-haired pure bred or mixed breed cats generally tend to be friendlier than long-haired cats. Though the sociability factor of mixed breed cats is harder to predict, simply watching to see if she interacts nicely with other cats at the shelter will usually be a good indicator. 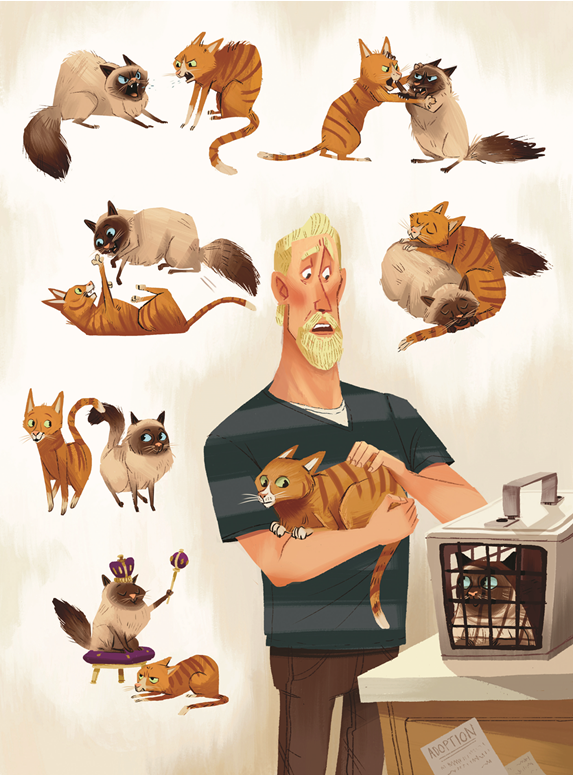 Before you visit your local shelter for that new cat, you’ll need to take some precautions first, and also obtain a few new items. First, be sure to set up a “new cat” room ahead of time. Whether you choose a kitten or an older cat, the newbie will at first need to be sequestered in a room of its own, temporarily separated from the resident cat. This “quarantine” will allow the cats to hear and smell each other, but not actually greet in person. This period should last at least a few days.

Next, purchase some type of screening or several baby gates, which will be placed in the doorway between the new cat room and the rest of the house. Once the initial quarantine is over, you’ll open the door and replace it with the see-through barrier, allowing everything but actual contact.

You will need to purchase a second litter box and scratching post and separate food and water dishes for the newbie. While you’re at it, buy a few new cat toys. And if you can afford it, get a carpeted, multi-tiered “kitty condo” to expand their territory and give them places to escape from the other if need be. Lastly, get a plant sprayer bottle to break up the occasional fight.

Once you find that perfect new cat, you’ll be tempted to rush things, but it’s key you gradually introduce her into your resident cat’s world. Take your time. Bring the new cat into the home in a box (usually provided by the shelter), and release her into the “quarantine” room, which should be set up nicely with the litter box, dishes, toys, a bed, and a scratching post as this will be her home for at least a few days. The door at this point should be closed. Both cats will hear and smell each other without being able to come face to face yet.

After a few days, switch the cats for a few hours each day, giving the new cat a chance to explore and the resident cat the opportunity to investigate the “invader’s” scent. Have a friend help you with this quick switch. Watch for marking at this time, even with a female. Do this switching for two or three days.

Now, with the new cat back into the quarantine room, replace the door with the see-through barrier. Odds are both cats will immediately go to the barrier and check each other out. If the new cat is a kitten, she’ll most likely be very curious and open to greeting, while the resident adult cat will remain guarded or perhaps even hissy. That’s okay; just be patient. Leave this arrangement in place for a few days and see what happens.

Now it’s time to let them interact in the main area. They might sniff each other, run away, fight, or even get along—it’s hard to tell. If the new pet is a kitten, expect her to be open to interaction, with your resident cat acting standoffish but not altogether aggressive. This is due to the kitten’s age; she just isn’t that big of a threat. But if the new kid is an adult, be ready with the sprayer bottle to break up a fight. You can even toss a cat toy at them to break up the tension

If it seems to be working, let them figure it out. But if it’s too violent, revert back to keeping them in separate rooms for a few days with the barrier in place. It could take weeks before they accept each other, so be patient!

Eventually, a state of resignation should take hold in your resident cat’s mind. She’ll not be happy to share her territory but, as long as there is sufficient space and places for the cats to retreat to, things should eventually work out.

At this stage, be sure to feed them separately to avoid food aggression. Gradually move their dishes closer over time, until they can eat in the same room. Monitor feeding time and watch for one cat stealing food from the other. Leave out toys and perhaps even two cardboard boxes filled with newspaper and a few treats to encourage exploration and to provide the cats with an alternative to direct conflict. Like kids taught to get along through sports, distractions can help your cats find common ground.

Unlike dogs, who make friends fairly quickly, cats take a while to accept new pets or people into their sanctum. But if you choose the right new cat, stay patient, and ease them into the new situation, chances are they will eventually accept each other, and ultimately be sleeping together in a furry little tangle. 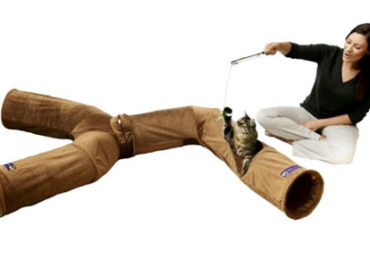 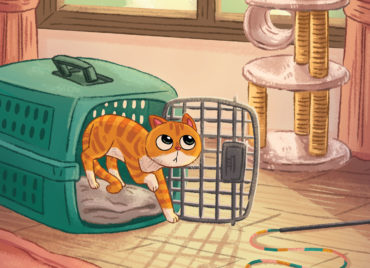