Abandoned cat on his way to start his new "Wonderful Life"

After being abandoned at the Helen Woodward Animal Center on Christmas Eve 2013, 7 year old George Bailey (the cat) is gaining recognition all over the internet. He was left with a note of apology from the former owner citing that he no longer had the means to properly take care of this faithful cat. The sweet cat (formerly named Jerry) had an immediate impact on the staff at HWAC, who renamed him George Bailey in honour of the "It's a Wonderful Life" main character who questions his life's meaning around the holiday season. Hopefully cat George Bailey knows in his heart the impact he has had on people's lives as love has coming pouring out for him from all over the world.

He still has a bit of healing to do at HWAC before he can safely be adopted, but when he is ready, we just know that he will surely find an amazing and loving forever home.

Check out this video of cuddly George. 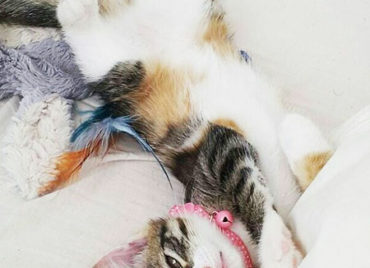 Cats in the News Why It’s So Important To Take Your...

Cats in the News Pet Industry Thrives With New and Younge...
Comments (0)