Miracle cat that dug himself out of grave doing “amazing” today, says adopter

Everyone thought it was the end for Bart in January 2015 when he was hit by a car and presumed dead. His owners said their goodbyes and buried him in a grave, only for him to dig himself out five days later. The unbelievable true story was international news.

As the story developed, it included a lengthy legal battle between the previous owners and the Tampa Bay Humane Society. Though alive, Bart was severely injured and in need of immediate, extensive medical care, which was provided by the Humane Society—but not without some complication. As it turns out, Bart was the victim of severe neglect by his former owners and was unable to be returned to his former life.

Bart immediately became a minor celebrity, garnering gifts, donations, and attention from around the globe. He paid it back in full with his silly and affectionate nature, enjoying his safety and celebrity status. 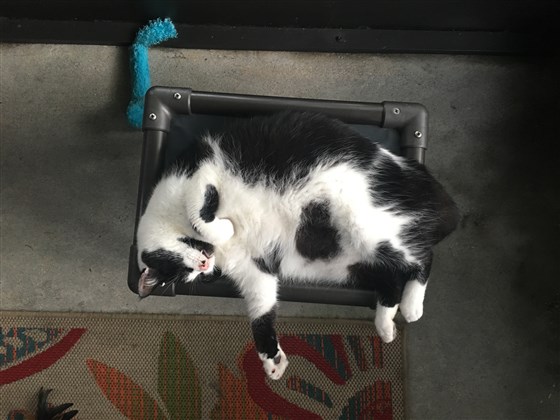 The best part? Bart was officially adopted in September 2016 to his forever home by a shelter worker named Valerie, and today he is doing “amazing,” she shares in an update this week.

Valerie told Today Bart has “always been a big, old love,” looking for affection constantly and enjoying the presence of people. Bart spends his days with three other cats, playing with toys, and delighting in (maybe too many) treats.

Bart’s journey is an incredible miracle, literally crawling his way from the grave to ultimately find a safe, loving home. His story is one that both inspires and touches the heart. It is Valerie’s hope that by sharing Bart’s story, others will be motivated to support shelters and adopt animals in need, no matter their background. You can check out Bart’s early blog here.

Cats in the News New species of wild cat discovered
Cat Culture What to Watch: The Electrical Life of Lo...
Tags:
Share:
Comments (1)