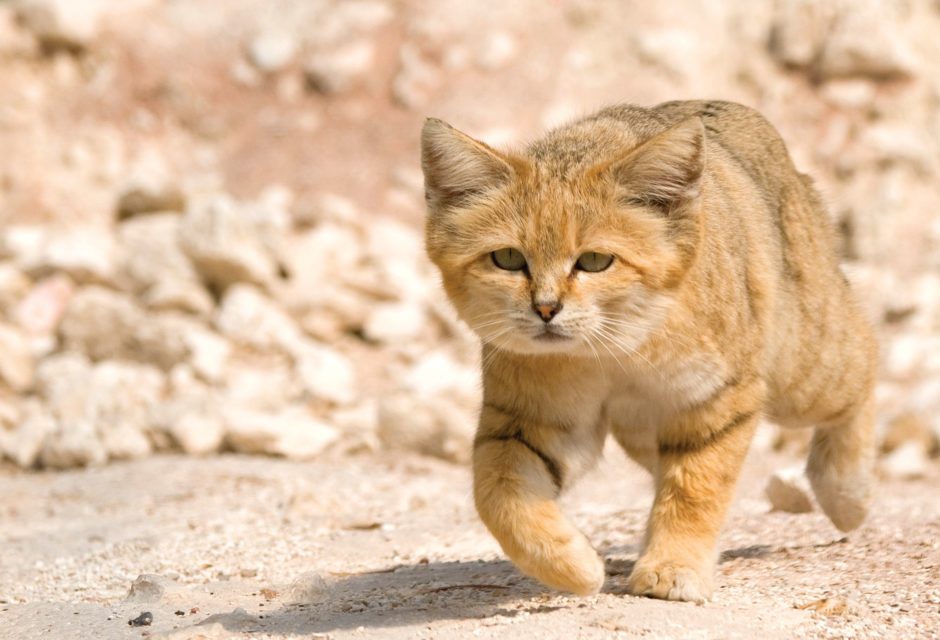 Only a few of the world’s 38 wild cat species are majestic predators who dominate their landscapes, like tigers and lions. Most are as small as house cats and seldom seen even by the conservation scientists who study them. Small wild cats are now mainly found in remote locations like the Tibetan Plateau, the Mongolian steppe, Asian rainforests, and the arid regions of Arabia, Africa, and the Andes. Many are keystone species that, despite their small size and low numbers, are critical to balanced ecosystems. Each cat species has evolved to adapt to its habitat, developing a unique set of characteristics that enable it to thrive. But now their survival is threatened by habitat destruction, poaching, and the wild pet trade. 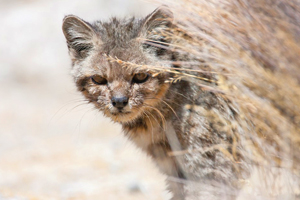 Andean Cat
The Andean Cat is indigenous to the high Andes of Peru, Bolivia, Northern Argentina, and Chile. An endangered species, it is the most threatened cat in the Americas, and among the rarest and least known in the world. Nicolás Lagos Silva, a researcher at the University of Chile, says that he had “always wondered what creatures could survive in the harsh, arid environments of the magnificent Andes, where we humans can barely breathe the thin air. But the Andean cat and other phenomenal creatures live there.” The Andean cat keeps warm by wrapping its furry tail, twice as long as its body, around itself. One of the top predators in a very fragile ecosystem, its protection is critical not only for its own survival but also for the biodiversity of the high Andres. Now, livestock grazing, mining, and unregulated tourism threaten its existence. Lagos Silva reports that he has been researching the Andean cat since 2007, and he has yet to see one in the wild.

The world’s small cats are at risk of disappearing before we even know enough about them to protect them. Lovers of small cats, both wild and domestic, can help save these rare species by donating to the Small Cat Action Fund, a conservation research program co-sponsored by the International Society for Endangered Cats (wildcatconservation.org) and Panthera (panthera.org/donate/SCAF), and by discouraging the trade in wild cats and hybrids as pets. 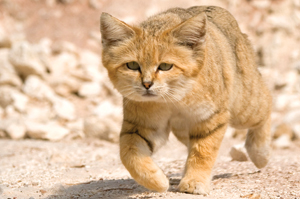 Sand Cat
The little sand cat of North Africa and southcentral Asia is also a desert species, but with a completely different personality. With its thick, insulating coat and matted fur on its feet to protect it from burning sand, this cat is so well adapted to the remote desert environment that it rarely faces competition or threats. When approached, it just hunkers down in the sand. Unfortunately, the sand cat’s docile, sweet nature and cute appearance appeal to people who want wild cats as pets, and this illegal trade, along with habitat degradation, threatens its survival. 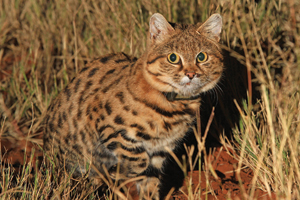 Black Footed Cat (wearing radio collar)
Harsh deserts are home to a few small cat species, such as the black footed cat. Alex Sliwa, a curator at Cologne Zoo in Germany, has studied the black footed cat in South Africa for 22 years. He says he’d never trade watching a lion or cheetah for this species, the smallest of the African cats, weighing only three to five pounds. “It’s the most fascinating cat,” he said, “with a very serious attitude to life. It’s highly strung, very active—a real handful.” Nocturnal, solitary, and alert, black footed cats are ready to hide or fight at any sign of danger. They can become accustomed to observation by researchers, but never tamed. 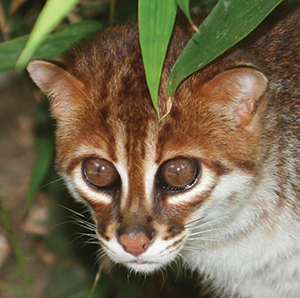 Flat-headed Cat
Most house cats avoid water, but a few wild cat species love it. Flat-headed cats are a small species found among the wetlands, lakes, and rivers of Borneo, Sumatra, and Malaysia. When threatened, they will dive into water rather than run into jungle. They have long snouts, uniquely close-set eyes, and, of course, flat heads. Their partially webbed toes help them swim efficiently, and their backward-pointed teeth allow them to grip the slippery fish and frogs that are their favourite foods. Once thought extinct, flat-headed cats are endangered because most of the wetlands that are their habitat are cleared for agriculture and other human purposes.