How I Met My Cat

After suffering a miscarriage three months into my first pregnancy, my dreams of motherhood felt all but lost. I fell into a depression that left me unable to get out of bed before noon and unwilling to leave the house for anything other than the weekly grocery shop. Frustrated by my inability to move on, my partner suggested we see a psychologist to coax me out of my funk. We were on our way to the clinic when I noticed a tiny ball of fur sticking out behind a lamppost. I crouched down and stared into the green eyes of a very dirty, barely month old kitten. Her left eye was filled with blood and her fur was matted. With one tiny meow that sounded more like the noise a squeaky toy makes, my heart melted. I bent down to touch her but my partner grabbed my hand before it reached her orange and black fur and told me we had to get going or we’d be late for our appointment. I glanced back to see the kitten who had perked up to greet me sink down to the ground. The gesture replicated the feeling in my chest. Since losing my child, I’d felt an emptiness that nothing seemed able to fill. Was it my imagination that, for that split second, I’d felt my spirits lift? We’d walked three blocks already before I stopped.

But when I went back to the lamppost, the ball of fur was no longer there. “She’s gone,” I cried. I couldn’t imagine where the kitten had disappeared. The corner was along a very busy street; if she’d tried to cross it, she’d no doubt be run over by a car. I looked around the block but saw nothing but cars and people. I turned around and continued on my way to my appointment when I saw a speck of orange. The kitten was laying in front a building that shaded her body! I bent down to examine her. Her left eye looked even worse than I’d previously thought.

Just then, a man walked by and saw me crouched down stroking the white triangular spot on kitten’s head with my index finger. “It’s going to die,” he said. “You should just leave it.” Anger welled inside me as I glared up at him. He quickly backed away without saying another word.

I re-positioned my body to block anyone else from seeing the tiny suffering kitten. I wanted to protect her from any more
negativity. For months I had stayed indoors, unwilling to let anyone see my suffering. It was as though I could feel what this kitten was feeling—wanting to hide from the pain, yet trying desperately to attract the attention of someone who could help her heal. Something told me I needed this kitten just as much as she needed me. I scooped her exhausted little body up into my arms and carried her to my apartment a half a block away.

I may not have been able to save my baby from dying, but this kitten was my second chance to nurture a living being and there was no way I was going to let her down. I spent the evening washing the dirt off her fur and paws with a cotton ball and feeding her formula through an eyedropper. I bundled her in a towel and held her in my lap while we watched TV and found a cardboard box for her to sleep in beside my bed.

I called my mother the next day and she commented on the change in my voice. “You sound happier today,” she said. When I told her about the kitten, whom I’d already named Lola, she understood. “There must have been some reason she was put in your path,” she said. I couldn’t have agreed more.

Lola and I became inseparable. I worked from home so I was able to spend ample time getting to know her. She curled up in my lap while I worked and once she grew large enough to jump onto my desk, she lay beside my computer, her tiny head resting on my forearm as I typed. No matter where I was, she always wanted to be close. If I got up to go to the bathroom, Lola would be there when I opened the door. If I left the house for any period of time at all, even just to run to the grocery store across the street, Lola would run to the door at the sound of my approaching footsteps, her tail straight up in the air like a flag pole. I know nothing will ever replace the loss of my child but Lola returned a piece of me that had been lost. She healed the part that felt helpless. 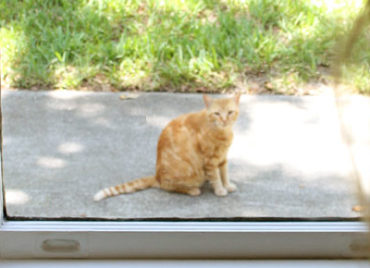