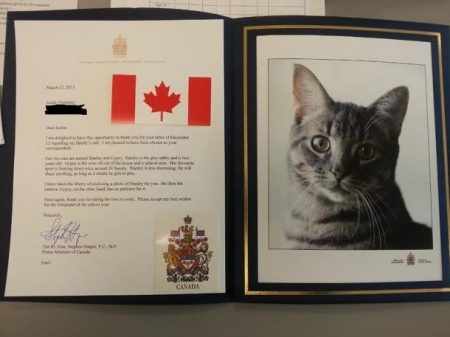 We know that Barack Obama is a dog person. However, the current Canadian Prime Minister is decidedly in favour of the feline. Justin Tremblay wrote in to the Prime Minister asking him about the wellbeing of his two cats, Stanley and Gypsy. Harper wrote back, documenting his cats’ favourite pastimes and personalities, and enclosing a photo of his younger cat, Stanley. (Apparently, Gypsy has no time for the camera.)  Canadians may have a variety of opinions on Harper’s political viewpoints, but I think we can all agree that Stanley is super cute.