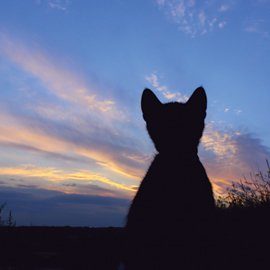 Planning For Your Cat’s Future… Without You

My aunt Kate was a lifelong cat lover. I couldn’t tell you how many cat-themed items she owned—jewelry, scarves, clothes, cups… you name it. She loved her cats deeply, including her last two charges, Felix and Eevee.

But, cancer came calling when Kate was in her late 50s. She fought the disease valiantly for a few years, and we all thought she had more time. Late in the fall of 2017, however, Kate had a small stroke, and everything changed.

While she was recovering, I visited Kate in the hospital. We had a long, candid, and very emotional talk about our lives and about her health, which was deteriorating rapidly. Her plan was to head up north with her daughter, where she would end her days peacefully in a hospice. But Kate hadn’t yet planned for her cats and she couldn’t take them. It was a source of great distress.

I promised her I would find them good homes. Kate was my godmother. She was 13 years older than me; as a child and teen, I simply idolized her. She taught me many things, including the importance of searching for the sparkle in every aspect of life. I wouldn’t stop, I assured her, until they were in good hands.

I ventured onto social media, posting about my aunt’s situation and the need to re-home her two cats. The outpouring of kindness was overwhelming. My posts were shared hundreds of times and I got some leads.

But Kate never did make it up north. She never even had a chance to say goodbye to her cats. A week after I made her that promise, she was in a local palliative care unit. I was at her bedside, holding her hand, and praying to any God that would listen to please end her suffering.

She passed away last November at the age of 61.

I met with a woman who wanted one cat, but under the circumstances was willing to take them both. But, on the morning after my aunt passed, I got the call… she had reconsidered. I knew it was for the best; the last thing I wanted was to send them away only to be returned. I thanked her for being so honest and for letting me know. Then, I hung up the phone and wept.

I had failed. Time was running out. Yes, the cats were being fed and the litter box cleaned out, but they were alone and needed homes.

In this case, all’s well that ends well—but more on that in a bit. First, I’d like to help others avoid this; my experience showed me how real the need is for all of us to ensure that our cats are cared for—and not just in the here and now.

But Kate never did make it up north. She never even had a chance to say goodbye to her cats. A week after I made her that promise, she was in a local palliative care unit. I was at her bedside, holding her hand, and praying to any God that would listen to please end her suffering.

Here are some steps cat-lovers can take to avoid this scenario.

First of all, think of a caregiver you trust to become your cat’s new guardian. If you have multiple cats, ask yourself how closely bonded they are. Could they thrive if separated? Talk to the people you have in mind and ask them if they would be willing to open their home to your cat in the event of your death.

Next, put pen to paper. A will is a valuable thing to have in place, pet guardian or not. Making your wishes clear in a will goes a long way to help your grieving family and friends should the worst happen. Your wishes for a caregiver should be clearly stated. Without naming one in your will, your cat’s future could be uncertain.

Matthew Urback, a Wills and Estates Lawyer in Toronto, notes that, “traditional Canadian law recognizes that pets are the equivalent of property. It is common for wills to have a residuary clause covering ‘everything else’ that isn’t explicitly referenced in the will. So, if a pet is not named specifically in the will, it is likely that whoever receives the residuary will be the recipient of your pet.”

It’s the same in the United States, says Colleen Healy, an attorney in the Chicagoland area whose practice includes Trust and Estate Planning. “A pet could be considered part of its owner’s personal property if there is a specific bequest of the pet to an individual, or in the event there is no mention of the pet, it would be considered part of the residue of the trust.”

It’s natural to want to avoid what must seem like a very morbid conversation, but the alternative is to leave things to chance.

“It’s always a good idea to speak about your Estate wishes before it’s too late,” says Urback, “and pet care is no exception.” Certainly, the reading of your will is not an ideal time for a future caregiver to learn about their new responsibilities as a cat guardian.

Now… about those vet bills.

Have you ever heard of a Pet Trust? It might sound like something only the rich would establish, but even those of us with modest estates should consider setting up a pet trust as part of our wills.

“I think it makes sense to plan for ongoing care,” says Urback. “While not legally required, it seems only fair given the responsibility you’ve thrust upon a caregiver.”

“For a pet trust to be effective,” says Healy, “it has to be funded.” Just how much to set aside?

“So many things need to be considered,” says Healy. “Does the pet have health issues? Are meds part of its routine? What about standards of living, such as grooming—once a month, or once a year?” Thinking through your routine bills and then adding a buffer for emergency care would be a good place to start.

Even beyond this, some set aside funds to compensate the caregiver—a means of thanking them for the time and effort that goes into a lifetime of pet care. That could be addressed in a will or trust. 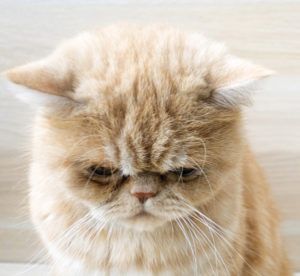 “I’ve done allocations of x-amount of money to the person who would take the pets,” says Healy, “and often it’s a preference list of a few caregivers who would be asked. Typically, the people on that list are not aware there is a financial benefit until after they’ve accepted the responsibility.”

If you have strong feelings about how you want your cat cared for in the event of your death, consult a legal expert in your province or state and create or alter your will or estate so that your wishes are clear. Through planning, we can ensure that our cats won’t be lost in the shuffle and their care expenses are covered, should the worst come to pass, and we have to leave them.

As for my aunt’s cats, time was up—I needed a solution. The cats weren’t closely bonded, and I suspected my aunt’s son might agree to take Felix. When I asked him, he didn’t hesitate to say yes. For my part, I was starting to bond with Eevee. I couldn’t stop staring at the photos I had taken of her. There was something pleading and almost desperate in her gaze. She was constantly on my mind and so was the promise I had made to Kate.

You’re probably wondering why I hadn’t stepped up to the plate already. Though my partner is a cat-man, I have extreme cat allergies—think hives, goopy eyes, coughing and wheezing, itchiness. That aside, we live in a tiny house along with two dogs and a very active toddler. For all of these reasons, I know I would have been the last person Kate would have chosen as a caregiver.

But, in the hall of the church following my aunt’s service, I pulled up a photo of Eevee on my iPhone and said to my partner, “You know… we could take her.”

He was aghast. “No way! You know I love the idea. But you’re going to torture yourself.”

He was right, and I knew it. But I reminded him of my promise and told him something in my bones told me that I needed to bring her home. And so we did.

It has been an adjustment. I take a lot of medicine, but I’ll be okay—and so will Eevee. She immediately changed the energy of our home. Watching her settle in and start to express her sweet, quirky personality has been a joy. She’s part of the family and always will be. Like my aunt, Eevee is a beauty and doesn’t have a mean bone in her body. And let me tell you… this cat sparkles.

It’s a happy ending, but under different circumstances, a cat in Eevee’s situation could have easily ended up languishing in a shelter or, worse yet, facing euthanasia if that shelter was overcrowded. The moral of the story is this: Love your cats and cherish them today, but don’t forget to plan for their tomorrow. Life, by nature, is uncertain. Your cats’ futures don’t need to be.