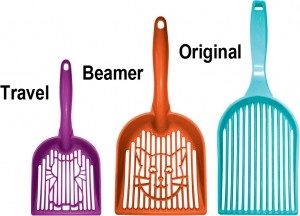 Like most cat parents, cleaning the litter box is one of my least favorite chores. Don’t get me wrong, I do it diligently. Keeping the litter box clean is very important. Many inappropriate elimination problems are caused by a box that isn’t kept clean enough, at least, not from the cat’s point of view.

Since I work from home, I pretty much scoop as soon as Allegra or Ruby deposit something in one of our two boxes (especially if it’s in the one right outside my office). And you better believe I make sure I do a good job, because Allegra, our official box supervisor, always follows behind and makes sure I’ve done it right.

I have yet to find a litter box scoop that I really like. I find that a lot of the plastic scoops on the market don’t handle well, and litter sticks to most of them. I’ve been using a litter scoop that resembles a metal slotted spoon for many years, because I found that that worked better for me. 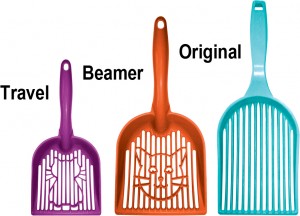 That’s why I was a little skeptical when I was first introduced to the Litter Lifter™. Could it really be that different from all the other plastic scoops out there? It only took a couple of uses to dispel any doubts: these scoops are fantastic.

The Litter Lifter™ features No-Sift™, peaked blades that are designed to only lift out the waste, leaving the clean litter in the box where it belongs.

The Litter Lifter™ gets the job done, and gets it done quickly and easily. The scoops are sturdy enough to scrape free even urine that attaches to the bottom or sides of the box without a whole lot of effort. You don’t have to shake the scoop to get rid of clean litter, it just drops through the specially angled blades, and even very small litter clumps stay in the scoop. I see two advantages to not having to shake the scoop: if you’re using a litter that creates a lot of dust, you’re cutting down on that, and it’s also much easier on your wrists. For someone like me, who spends most of her day typing away on a keyboard, which can be hard on your wrists, that’s an important consideration.

The Litter Lifter™ definitely makes scooping the litter box less of a chore. More importantly, our boxes are even cleaner now, because even small litter fragments are completely removed.
The Litter Lifter™ comes in three sizes and 14 colors. I used the smallest size, sold as the Travel™ model, because I found it easiest to maneuver in the corners of the box, but I think the larger ones would probably make clean up even faster if I could get used to them, and they would probably be a better choice if you have a lot of boxes to scoop.

Allegra and Ruby probably don’t much care what I use to scoop their boxes, but I think Box Supervisor Allegra is approving of the cleaner boxes!

This video accurately shows all the features of the Litter Lifter™:

Play A House is Not A Home Without a Cat 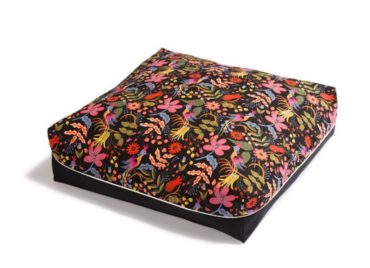