The Cat Came Back

Cat visitations at a hospice

It was Blaize on the phone. She was calling from the Hospice House.

Blaize and I had been friends for years, ever since I interviewed her about the Dixie Hemingway Mystery series she published. Her books were about a pet sitter who took care of cats when folks were out of town, and the pet sitter sleuth never failed to discover an intriguing mystery during her daily rounds.

“I know you're coming to visit me this afternoon, Suzanne,”— I'd never heard Blaize so excited—“but I just had to call to tell you something. I saw Rudy.”

The staff at the Hospice House had seen a white cat running through the halls, but when they tried to catch him, the cat would disappear around the corner. So a nurse made the rounds asking every patient if they had a white cat. Blaize said she didn't own a cat, but she knew a white cat. “I told them it must be Rudy, your cat. And, Suzanne, it is Rudy. I saw him—he was sitting in a chair across the hall from me. I saw Rudy!”

Well that was a shocker, especially since Rudy, my 25 year-oldcat, had died six months earlier. Blaize was in the final stages of colon cancer and I assumed the doctor had given her some really strong pain medicine. So I didn't question her about seeing Rudy.

Every day when I'd go to visit Blaize, it didn't feel like I was visiting someone who was dying. Instead I'd treat the visit as if I were just stopping by for coffee and a chat. I'd bring along sweaters I'd found shopping and do a little style show and I'd always bring some homemade baked goods or deviled eggs—her favourite. My 16-year-old granddaughter, Bailey, was visiting so she helped me make the deviled eggs and asked if she could go along. On the way to the Hospice House I told Bailey about the phone call and explained to her that Blaize was probably hallucinating from her pain medicine.

I didn't mention the Rudy sighting to Blaize while we were visiting and she didn't mention it either until Bailey and I were getting ready to leave. “When you go, be sure to look in the room at the end of the hall. If the door is open you'll probably see Rudy sitting in the chair. I feel so blessed that Rudy has come to be with me.”

I looked over at Blaize's son, who was sitting in the room, expecting him to give me a look of confirmation that his mother was imagining things. But he didn't. “Yes,” he said, “It's true! I've seen Rudy myself.”

It was too strange to even ask Blaize or her son all the questions running through my mind. Does the person in the room at the end of the hall see Rudy? Don't they think it's strange that a cat they don't know, a cat who died six months ago, is sitting in a chair in their room? If the patient gets company and they need the chair, does Rudy gracefully hop down and offer his seat? Why isn't the staff buzzing, talking about the dead cat who's walking the halls of the Hospice House? Why isn't a reporter here writing a story for the 6 o'clock news? Am I the only one who feels like they're in The Twilight Zone? But I didn't say any of those things because it was apparent that Rudy coming to spend time with Blaize meant a lot to her and was bringing her a sense of peace.

Bailey saw Rudy, too. She looked at me, I looked at Bailey, and we were frozen in the middle of the hallway. We looked again and again and again. Brave Bailey started walking towards the room, but I stopped her; you can't just walk into somebody's room.

It all felt too bizarre. We walked out of the Hospice House and sat in the car unable to say much of anything. I saw Rudy; Bailey saw Rudy. We were stunned and it took awhile before I felt calm enough to drive home.

When my husband and I adopted Rudy from the shelter, he was there because someone left him alone in their apartment when they moved. So it doesn't surprise me that Rudy wanted to make sure Blaize didn't feel alone as she was preparing to move on.

Thank you, Rudy, for bringing such peace to my friend.

*Besides being a talented author, Suzanne Beecher is behind ShelterWishList.com, an initiative designed to help animal shelters get what they need, be it donations of supplies or volunteers. Our kind of lady! 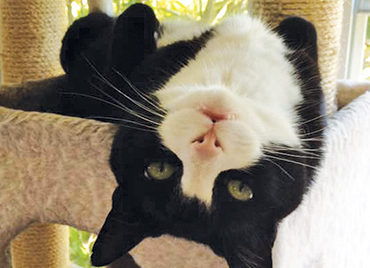 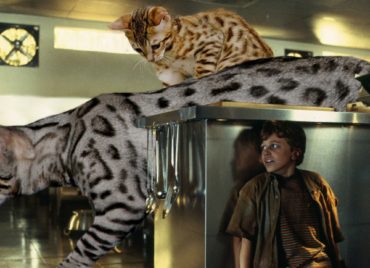