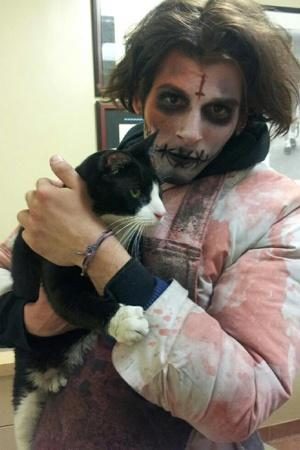 Want to hear a heartwarming story about cats and zombies? Two years ago James Helliesen, an NYPD officer with a soft spot for cuddly felines, lost his cat, named Disaster, after Disaster escaped through a open window at the officer’s Long Island, NY home. (Helliesen fosters cats when he isn’t patrolling the streets for his precinct.) Hellieson assumed the cat was gone for good – until he heard from the BluePearl Veterinary Partners in Manhattan, saying he had been rescued by a zombie.

However, this is no George Romero story. Jeremy Zelkowitz, who works as a zombie for a NYC haunted house, scooped up the scared kitty and took him to the vet. He arrived still sporting his stage makeup.  Vets scanned the microchipped cat and contacted Helliesen. They then snapped the photo you see above.

The moral of the story? The zombie apocalypse is unlikely, but microchipping your cats is a good precaution for any emergency.