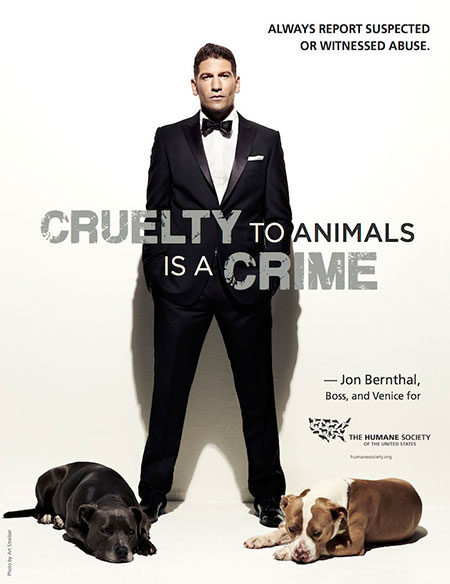 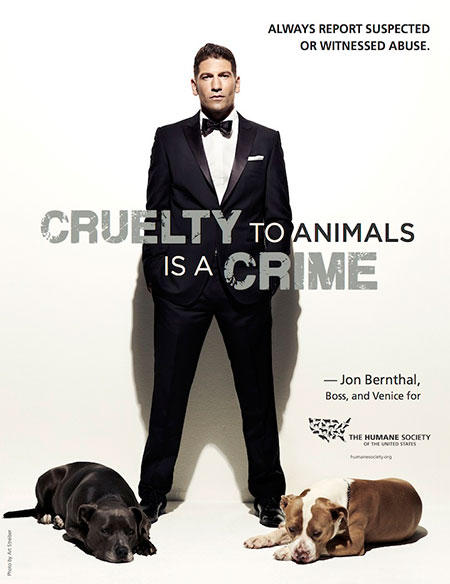 LOS ANGELES (Dec. 17, 2013) – In the starring role in TNT’s new miniseries Mob City, Jon Bernthal's character often finds himself in morally ambiguous situations. But in real life, Bernthal knows that when it comes to animal abuse, the issue is black and white: animal cruelty is a crime. That’s why Bernthal and his two rescued pit bulls, Boss and Venice, star in The Humane Society of the United States’ new campaign – shot by renowned celebrity photographer, Art Streiber–calling on the public to report suspected or witnessed animal abuse.

Countless dogs, cats and other animals fall victim to unnecessary cruelty and neglect. Every state has laws prohibiting animal cruelty, and 49 of them contain felony provisions. However, a law is only as good as its enforcement, and that’s why animals rely on us to protect them. “There is no excuse for animal cruelty,” says The Walking Dead alum. “Animals are among the most vulnerable beings on this planet. That’s why I am urging everyone to speak up if they see or suspect cruelty; don’t expect that someone else will.”

Turning a blind eye to cruel and inhumane behavior can even lead to deadly results. Many studies have shown that those who are cruel to animals are more likely to turn their violent behavior towards fellow humans.

Click here for The Humane Society of the United States’ tips on reporting animal cruelty. 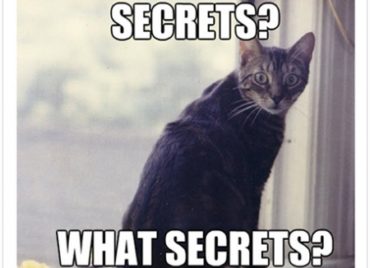 Cats in the News Chatty Cat Challenge – What Makes ... 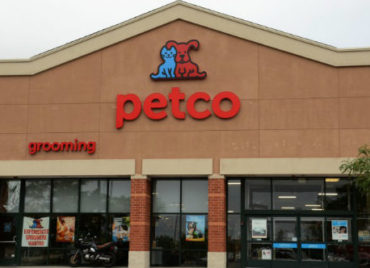