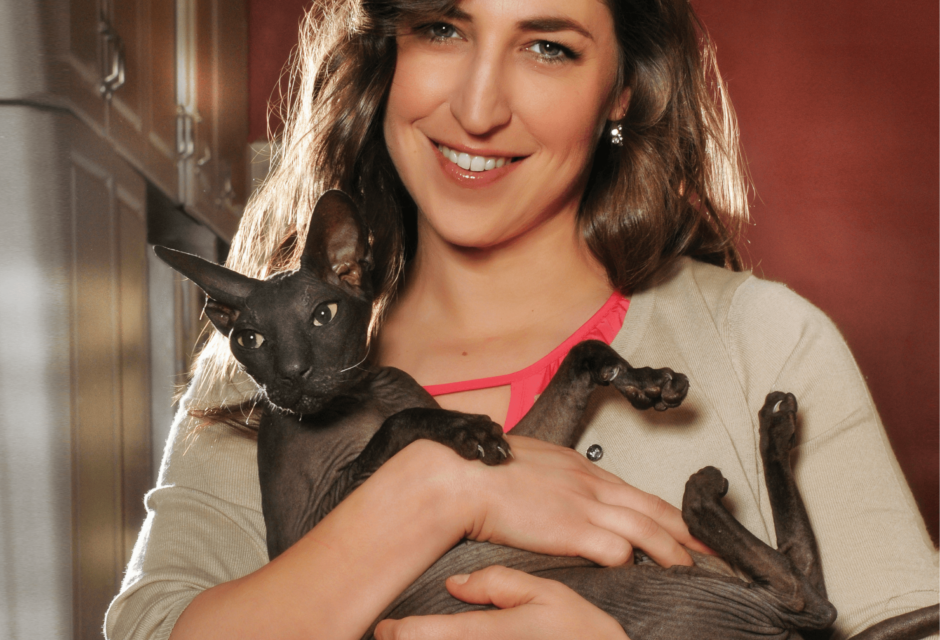 A Q & A with Mayim Bialik

By: Interview & photograph by Chris Ameruoso

From Blossom to The Big Bang Theory, actress Mayim Bialik has been beaming her way into our consciousness since she was a preteen. But this Hollywood mainstay bucks the celebrity trends, doing things her own way. Aside from her current, Emmynominated starring role in a primetime sitcom, she’s also an attachment parenting expert, holds a PhD in neurosciences, and is a cat lover after our own hearts to boot. Just ask her “first son” Esau, a hairless Peterbald cat. The accomplished Mayim Bialik is many things, but conventional is not one of them.

Q: Tell us about your cat Esau. What is his story?
A: I consider Esau my first son. I got him nine years ago. At the time, I wasn’t as heavy into the vegan/animal rights community like I am now, and I fell in love with him at a pet store in Bel Air. Even as a tiny kitten, he was exceptionally affectionate, cuddly, and loving and I returned to the pet store where I first saw him a week after I first met him. His siblings had been adopted but he remained. I took him home and we’ve been together ever since. He is a Peterbald breed and, as others of his breed are, he is more human than most humans I know. He’s communicative, exceedingly affectionate, always [feeling] cold, but always loving. 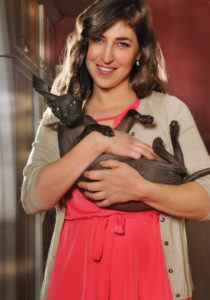 A: He’s very honest and communicates his needs pretty directly. He loves to be held and he likes a good cuddle. I hope those are things I share with him. How did Esau adapt when you had children? What is the relationship between Esau and your two boys, Miles, 7, and Frederick, 4, like? A: Esau bonds very strongly to humans, so I am his beloved, as it were. He is quite possessive of me, and he does love the boys, but also prefers when they are not in bed with me so he has me all to himself. When my second son was born, we had just lost a cat (his buddy, Moses), and he bonded very closely with the baby, sleeping next to him whenever he napped.

Q: What have your boys learned from having a cat in their lives?
A: They learn how to be gentle, how to care for other living things, and also how to be responsible for another living thing. They also get tremendous joy from him and get to see that animals are intelligent and emotional creatures to be respected and adored.

Q: What are some of Esau’s favourite things?
A: I found out the hard way that he likes to eat anything. It’s not healthy for cats to eat everything but he’s been caught more than once tearing open a bag of challah, and if you take your eyes off him when there’s any melon around… He also loves feather-based cat toys, napping under blankets, and sleeping in my arms. He doesn’t like baths. He also likes catching crickets in our house and once caught a lizard. I was able to save the lizard but he had a great time catching it.

Q: You’ve just announced your divorce from your husband, which is surely a challenging adjustment for everyone involved. Is Esau a help to you and your kids in this?
A: This is a great question, and also a hard one. Esau is a wonderful comfort to me, of course, and the boys love to cuddle him and love him up when they come to my house for my nights with them. Esau also misses my ex, but whenever he comes over with the boys, he has special time with Esau, and also helps me trim Esau’s nails, which is a two-person job!

Q: What type of affection do you get from a hairless breed?
A: Peterbalds are often described as part monkey, part dog, and part human and that’s certainly true of Esau. He greets me at the door and then walks me to the door when I leave. He purrs almost all the time and likes to be in the middle of whatever anyone is doing. Because he gets cold, he’s particularly affectionate at night and in the winter months, but he’s sort of always available to be in my lap or next to me.

Q: What have you learned from having Esau in your life? What does he mean to you?
A: I’ve never had a cat who has such a human presence. I get a lot of comfort from him. Esau has been a huge part of my adult life. I miss him when I’m not home with him and he misses me too. I don’t think I’ll ever find a cat with a personality like his.

Q: If he could tell us one secret about Mayim what would he tell?
A: I think he would say that no matter how hard a day I’ve had or how down I am, the best medicine is Esau. 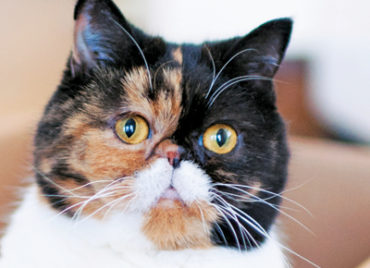 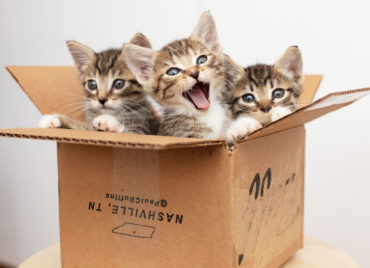