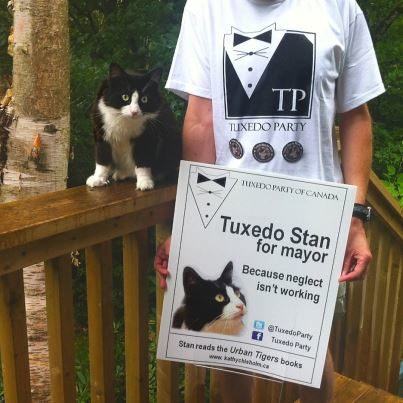 Running under the slogan “because negligence isn’t working”, a Nova Scotian cat named Tuxedo Stan has risen to prominence in city politics in Halifax.
Retired veterinarian Hugh Chisolm launched the Tuxedo Party with his wife Kathy to raise awareness of the thousands of street cats living on the streets, with sales of campaign buttons, T-shirts and lawn signs raising money for spay-neuter programs in Halifax. Tuxedo Stan, although not legally allowed to run for mayor, has received support from his human colleagues, many of who attended his standing room only campaign launch party September 10th. Tuxedo Stan is entering a perilous world, however – Larry the Cat lost his job this past weekend after being caught napping on the job.