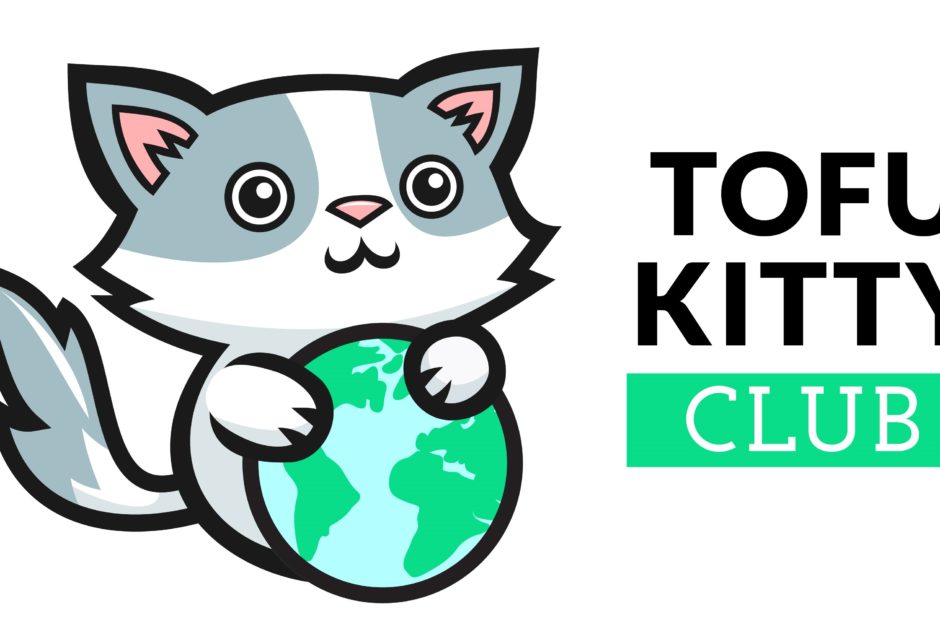 The Hidden Dangers of Kitty Litter

The hidden health and environmental hazards in your cat’s litter

Let’s face it: It feels like there are a million different kitty litters on the market. How do you choose between them all? Most of the time it comes down to personal preferences of both you and your cat. But as it turns out, not all litters are made the same. Some can even be harmful to your feline companions. Michael Maddox, environmental ecologist and founder of TofuKitty Club, sat down with us to explain the dangers of some of the litters on the market, what types of litters are the healthier option for your pet, and why soy litter is the way to go.

I love my kitty (she’s an adorable half Persian half Scottish fold!) and I’m sure you love your cat(s) also. That’s why I take the time to research everything I use for my kitty very carefully, which is how I found out about the many dangers of traditional kitty litter. I was really surprised to ﬁnd out that most of the common litter choices are actually dangerous for not only my cat, but also for myself, my family, and the environment! 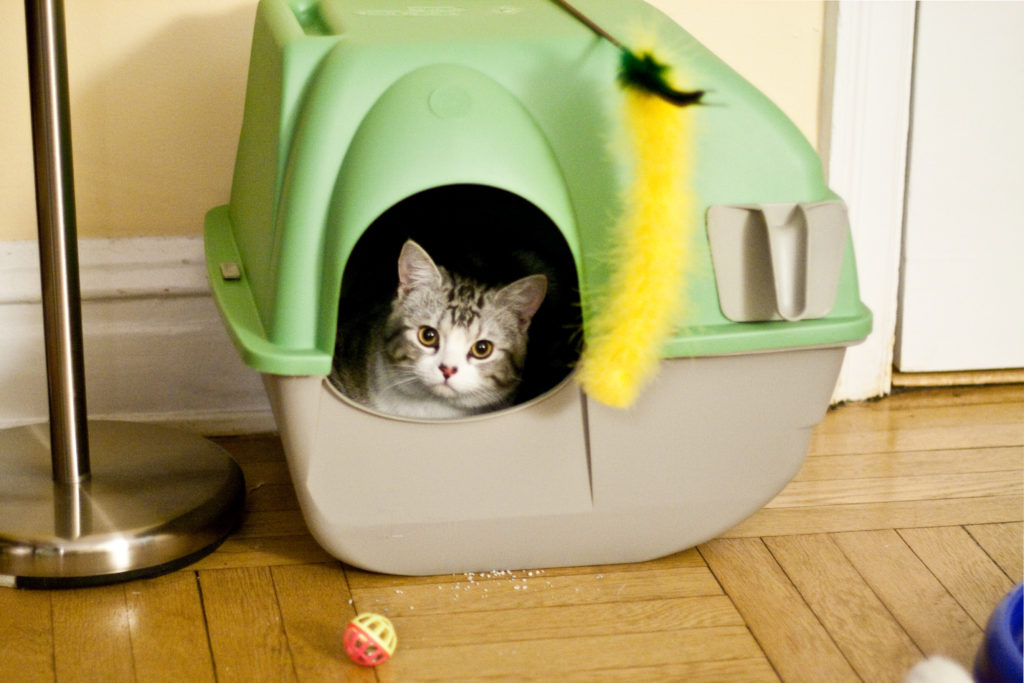 There are many diﬀerent types of litters to choose from – so many in fact, that it gets rather stressful sometimes!  What does my cat need in a litter? What do I need? Well, I know wild cats look for sandy soil, which allows them to dig, and they prefer to keep their business hidden. So, I need litter that my cat can easily dig in. Also, wild cats do not return to the same restroom spot so as to avoid predators, so it must be easy for me to keep clean (it’s always a good idea to clean the litter box daily!). My biggest concern, however, is my cat’s health. I want to make sure my kitty is not being exposed to anything dangerous when using the litter box. So, what litter is available that won’t negatively aﬀect my cat’s health, while also addressing my cat’s needs, my needs, and is also good for the planet?

Let’s start by looking at the most common litter types, and why many of them are actually a health and environmental hazard.

Clay litter is the number one most recognized type of litter among cat owners. It’s great for odor control, relatively easy to scoop, and many cats have no problem with learning to dig in clay litter. However, there are several problems with clay litter.

First, there’s the huge amount of dust. Some cats can inhale enough dust that it can cause lung issues. The dust contains a toxic hidden chemical called sodium bentonite.  This is what causes the clumping action in clay litter, and it’s especially dangerous when ingested—which all cats will do when they lick their paws after using the litterbox.  Clay litter can cause intestinal blockages in cats and is also a known health hazard for people.

Finally, clay litter is environmentally destructive. It is strip mined from otherwise pristine natural environments, killing native wildlife, ruining their habitat, and dumping tons of silt into rivers and the ocean. To make matters worse, all used clay litter ends up in the garbage, resulting in hundreds of thousands of tons of used cat litter being added to landfills each year. The bottom line is that, although clay litter is cheap, that’s about the only beneﬁt it oﬀers.  It’s harmful for your cat, for you, and for the planet. 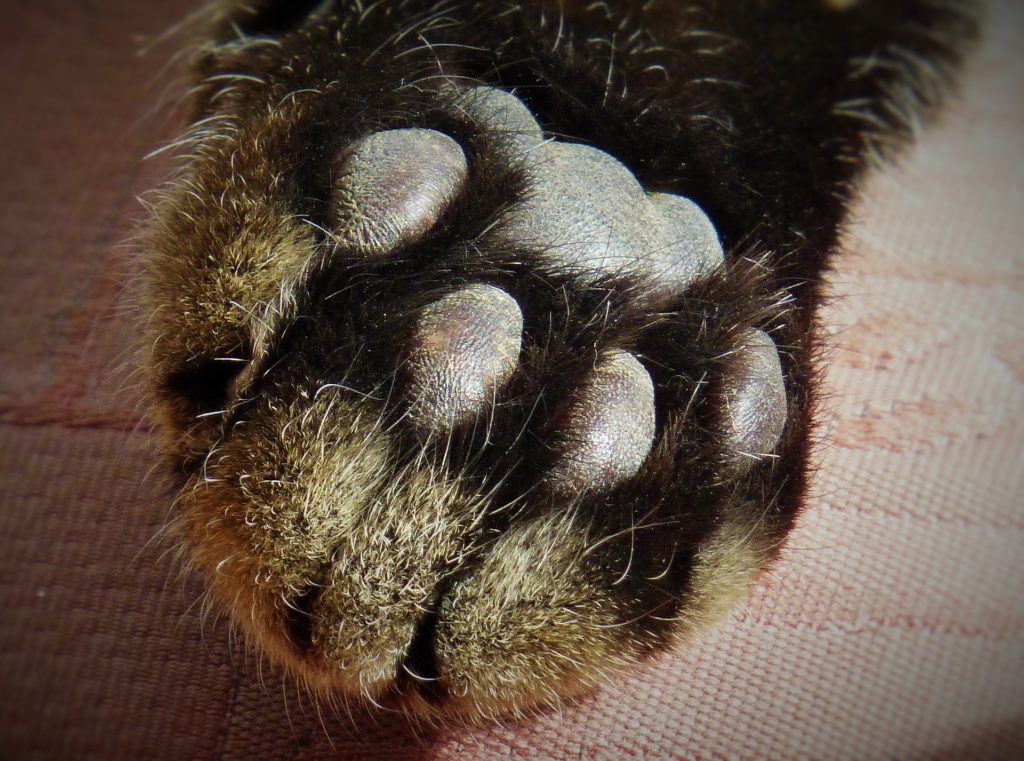 Crystal litter is made from the same type of crystals that you ﬁnd in silica packets. This is great for absorbing liquids, but is also very dangerous if accidentally eaten. The crystals are very painful on paws and diﬃcult for your kitty to dig in, which is why some cats stop using the litter box after you switch to crystal litter.

The main concern of crystal litter is that it can lead to your cat developing silicosis from the inhalation of microscopic silica dust. Even worse, most crystal litter is dyed blue with a chemical called cobalt chloride. This dye helps indicate the moisture level in the litter, but is known to cause cancer in both your kitty and you.

Just like with clay litter, the mining of silica for crystal litter is environmentally destructive. Silica is often strip mined or excavated directly from beaches. It also ends up in landﬁlls and is non-biodegradable.

This litter type is a rather “new” litter on the market, and is made from recycled newspaper. This is a good idea in theory because it’s being recycled, and it’s easy for cats to dig in. But that’s where the beneﬁts end, because just like with clay litter, the dangerous clumping compound, sodium bentonite, is added to paper litter. Without this clumping agent, paper litter wouldn’t clump. Paper litter also isn’t very absorbent, doesn’t control odors very well, and ultimately, ends up in a landﬁll right alongside clay litter, making it not a good alternative to clay and crystal litter.

Several plant-based litters have recently been invented that work well and provide a safe, earth-friendly choice for cat owners.  Plant- based litter can be made from corn, wheat, or soy. The beneﬁts of using these litters is that no clumping agent is needed and dust is kept to a minimum, if not completely non-existent. A real benefit is many of these litters are ﬂushable as well*.

Unfortunately, corn and wheat litters have a few problems: they tend to attract pests (or even come with them!), they don’t clump very well, they track all over the place, and they’re not very good at odor control. The upside is that they’re relatively inexpensive and biodegradable. However, this isn’t enough for most cat owners. We need something that’s easy to clean and helps reduce odours. 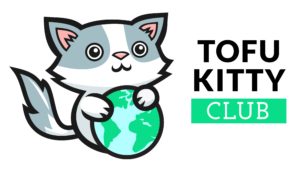 As an environmental ecologist, I used my scientiﬁc background to develop a new type of kitty litter made entirely of recycled soy leaves and stems. Designed to make cat care as simple as possible, TofuKitty is easier, safer, and perfectly environmentally responsible.  Made entirely from food-grade soy leaves and stems (not estrogen-containing beans!) that locks away greenhouse gasses, TofuKitty clumps instantly, is easily ﬂushed away (it’s even safe for septic systems), has absolutely zero dust, and arrives at your door hassle-free each month. It doesn’t get any easier than this!

It’s 2-3x more absorbent than any other litter on the market, uses the cellulose found naturally in the plant stems for the clumping action, and is made entirely from plant parts that would otherwise end up in a landﬁll. All parts of this litter are biodegradable, compostable, and ﬂushable, which prevents it from being a burden on the environment.  It’s also 100% food grade, meaning there are absolutely no clumping agents or chemicals added so it’s the safest possible litter for your kitty and your family. 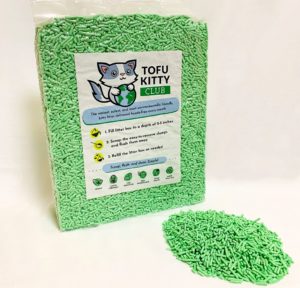 TofuKitty is safer: Made entirely of food-grade soy, TofuKitty has absolutely no harmful chemicals or clumping agents added, unlike traditional clay and crystal litters!

TofuKitty is earth friendly: Soy naturally locks away carbon dioxide from the atmosphere, so you’ll reduce greenhouse gasses and prevent the 180,000 dump trucks worth of clay and crystal litter that end up in a landﬁll each year.

TofuKitty is the best at odor control:  Because it’s up to 3 times more absorbent than other litters, TofuKitty instantly locks away odours in minutes, resulting in a litterbox that’s virtually odor free – really!

TofuKitty is award winning: Winner of a “Fave Find” award by Modern Cat Magazine for 2018, you can rest assured that you, your cat, and the planet will love TofuKitty!

You can ﬁnd out more at tofukittyclub.com , and save $5 with coupon code moderncat during checkout!

*However if your cat carries a parasite called Toxoplasma gondii, it can be transmitted through their feces. Sewage treatment can’t kill T. gondii, so it makes its way into the sea, posing a deadly threat to sea otters. I did some extra research into T. gondii, and found that not all cats are carriers, and in fact, the only likely way for your cat to become infected is if it’s outside killing and eating native wildlife.

Cats in the News One Heart, One Love 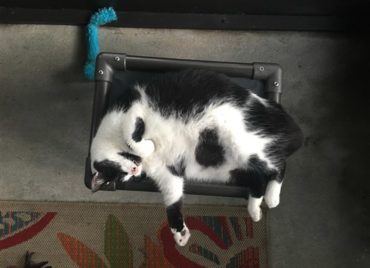 Cats in the News “Zombie Cat” is Living His Best Life...
Comments (0)