12 Sounds Cats Make and What They Mean

Think your cat’s meows, chirps, yowls, and purrs are just random gibberish? Think again. She’s actually communicating to you information about her world and about how she feels toward you. The good news is that if you listen closely, you just might begin to understand what the sounds your cat makes is all about and use that understanding to your advantage.

Next to birds, cats possess the widest range of vocalizations of any domestic pet. Though best known for their meows, purrs, hisses, and growls, the list of sounds they regularly make is more comprehensive than this. Depending on the situation, your cat is capable of making many distinct utterances, with multiple nuanced variations of each, according to importance. Some reflect contentment and ease, while others expose worry, fear, or even anger. All, though, are indicative of your cat’s emotional state of mind.

Perhaps the most commonly heard cat sound, the meow of an adult cat is almost exclusively used to communicate with humans, and not other cats. First uttered by kittens when in need of their mothers, this juvenile vocalization fades away as wild cats mature. But, as cats in domesticity tend to think of themselves as our eternal offspring, they maintain this endearing vocalization throughout their adult lives. Generally, a meowing cat wants something—attention or food or perhaps access to a room. Sometimes though, meows simply serve as a “welcome home” salutation.

Occasionally, a meow can signify loneliness or even illness. Older cats often meow more because of failing senses or due to anxiety over not being as nimble as before. In younger cats, the meow often gets shortened to an interrogative “mew?” when lonely or hungry. And the frequency of meowing is an indicator of a cat’s frame of mind; rapid-fire meows mean hey, pay attention to me, I’m talking here!

A longer, more plaintive “meowww” can indicate worry, annoyance, or objection to something. This version will often have a throatier quality to it, almost as if she is saying, “oh, come on.” And incessant meowing could indicate illness or injury; if you suspect this, consider a trip to the veterinarian.

Perhaps the most enjoyable and hypnotic of cat sounds, the purr is a soft, deep, throaty rumble, most often made when your cat is in the best of moods. Gently petting your cat while she nests in your lap is a sure way to bring forth this motoring sound of utter contentment.

On rare occasions, purring can occur when your cat is agitated over something. It’s similar to how you might nervously whistle or hum while waiting for in-laws to arrive for dinner. The key to discerning this “worry-purr” is body posture; if your cat’s ears are back and her body seems tense, the purr denotes concern over something.

Learned in kittenhood, these birdlike utterances are slightly more declarative than a meow. Originally used by mothers to tell kittens to pay attention and follow her, your cat may chirp in an effort to get you to pay attention to her or as a way to get you to check out something she deems important. Chirrups and squeaky little trills might also happen when a cat is excited and happy. 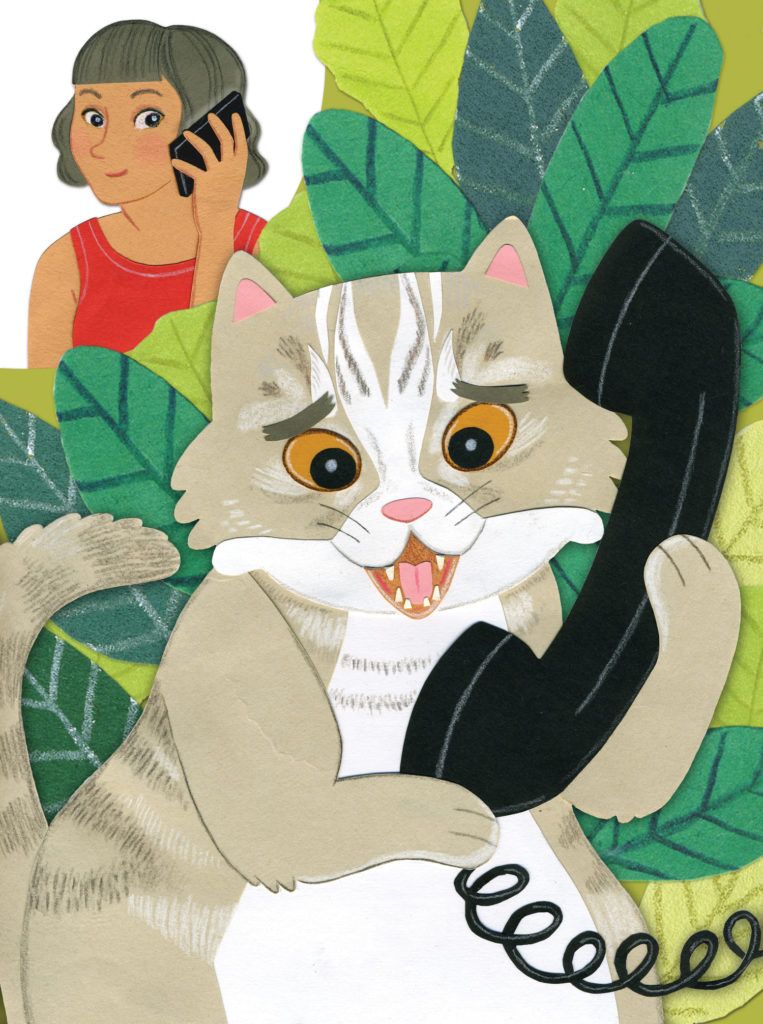 You might have heard your cat chatter her teeth while longingly staring out a window at a sparrow or squirrel in a tree. Sometimes accompanied by a chirp, squeak or faint cry, the chatter is thought to be an indicator of a cat’s predatory excitement and of her stress at not being able to get to the prize. Some claim the chatter is actually a mimicked bird or rodent call, but this is anecdotal at best as the hunting prowess of cats is dependent on silence and stealth.

There is no mistaking the intent of a cat’s hiss. Sounding like of a steak sizzling on the grill, it means your cat feels threatened and is ready to fight if need be. A big, goofy dog who gets too chummy with your feline is sure to provoke a hiss and perhaps more. Along with the threatening sound comes a change in a cat’s body language, including an arched back, puffed hair, twitchy tail, flattened ears, and an open mouth, fangs ready to strike. Spitting can also occur with a hiss. When your cat takes on this serpent-like guise, back off, and do what you can to remove the perceived threat.

Hissing depends very much upon the individual cat’s perception and level of comfort. Some friendly, outgoing felines might hardly ever hiss, while a more shy, reserved cat will resort to it whenever unsure of a situation. Abused, stray or feral cats are much more likely to go into “hissing mode” than is a well-adjusted, sociable pet.

Unlike the reasonably happy, searching sound of a meow, the yowl is a longer, more drawn-out moan that denotes, worry, discomfort, territorial concern or mating issues. The yowl is often a cat-to-cat communication; it can mean “I want to mate,” or “I don’t want you coming around my place.” It can also occur when a cat isn’t feeling well, when senses or cognitive functions decline, or when something in her environment (perhaps a new cat on the block) isn’t to her liking. Cats who get relocated to new territories or adopted out to a new home can often yowl out their regret at the lost digs. And some cats will yowl simply out of boredom.

If your cat begins to incessantly yowl, check for signs of illness; a trip to your veterinarian might be in order. If he or she has not yet been altered, see to it as soon as possible, especially if you let your cat outdoors. Be aware of any cats who might be “invading” your cat’s territory; in some cases, strays or feral cats may need to be trapped, neutered, and hopefully adopted out to the right home. Be sure your cat has ample toys and that she gets enough attention from you. Sometimes all it takes to end a case of the yowls is just an extra play session each day.

Uttered by females in heat when calling out to prospective mates, this abbreviated, plaintive, hollow-sounding version of a yowl has an almost “ahh-roo-ugh?” sound to it. During the caterwaul, the un-spayed female will do all she can to get outside to meet up with males cats, who will most likely be milling about, yowling and fighting for the honour.

If the un-spayed female is outdoors, her caterwauling will draw in a male, whereupon mating will surely occur. She will assume a head-down, rear-up position (called lordosis), while the male bites her neck and begins the mating process. When removed, the male’s barbed penis evidently creates pain for the female, causing her to emit a blood-curdling scream. The moral here: have your cats sterilized!

Cats in the midst of a fight may also scream. These primeval shrieks often come after a long, ominous yowl, and usually punctuate a climactic paw swat or vicious bite. Whole cats are more likely to fight, though even fixed pets will actively defend their territories. To avoid fighting injuries to your cat, consider keeping her indoors.

Often accompanying the hiss are random snarls and growls, usually indicative of fear, anger or territorial threat. Unlike those of larger cats, such as tigers and lions, the domestic cat’s snarling and growling are of a higher pitch and can start or end with a yowl. Generally, just leave this cat be, unless she’s in imminent danger from another cat. A snarling or growling cat will have the classic defensive body posture—puffed up fur, arched back, ears back, tail twitching.

Some cats are by nature more talkative than others. As a general rule, shorthaired cats tend to be more talkative and outgoing than longhaired felines. And if you are looking for an instinctively chatty kitty, consider certain breeds of Asian origin. These include:

If you’d prefer a less vocal cat, consider a Persian, Russian Blue, Chartreux, Norwegian Forest Cat, or Maine Coon. These breeds tend to be on the quieter side. But breed-specific guidelines are not failsafe; you could end up with a noisy Persian or a silent Siamese!

By knowing what your cat is trying to say, you’ll be better able to predict her mood, intentions, and needs. Whether she is hungry, sick, happy, lonely, playful or mad, you’ll understand and be better equipped to give her what she needs. And the two of you will be able to have a nice, friendly cat chat whenever the mood suits!

Behaviour How to Keep Your Cat Off of the Kitchen ...
Behaviour Litter Box Trouble!
Tags:
Share:
By: Steve Duno
Comments (134)

Cat Style Fave Finds
The Cat Gear Lookbook
Your at-a-glance guide to the best stuff for you & your cat
Daily Meow
Tiny Cat Stories
Daily Meow
Do You Look Like Your Cat?
Memorials
Going with Grace